Sister No. 93 Acura NSX GT3 perseveres to take 14th at the finish

Sebring, Fla. (18 March 2017) – The Mobil 1 Twelve Hours of Sebring is held at one of the toughest racetracks in America and the 12-hour endurance classic is arguably the most grueling race on the 2017 IMSA WeatherTech SportsCar Championship schedule. Michael Shank Racing with Curb/Agajanian understood the huge hill the team faced heading into its first 12-Hour event with the new Acura NSX GT3 platform as the team continues its 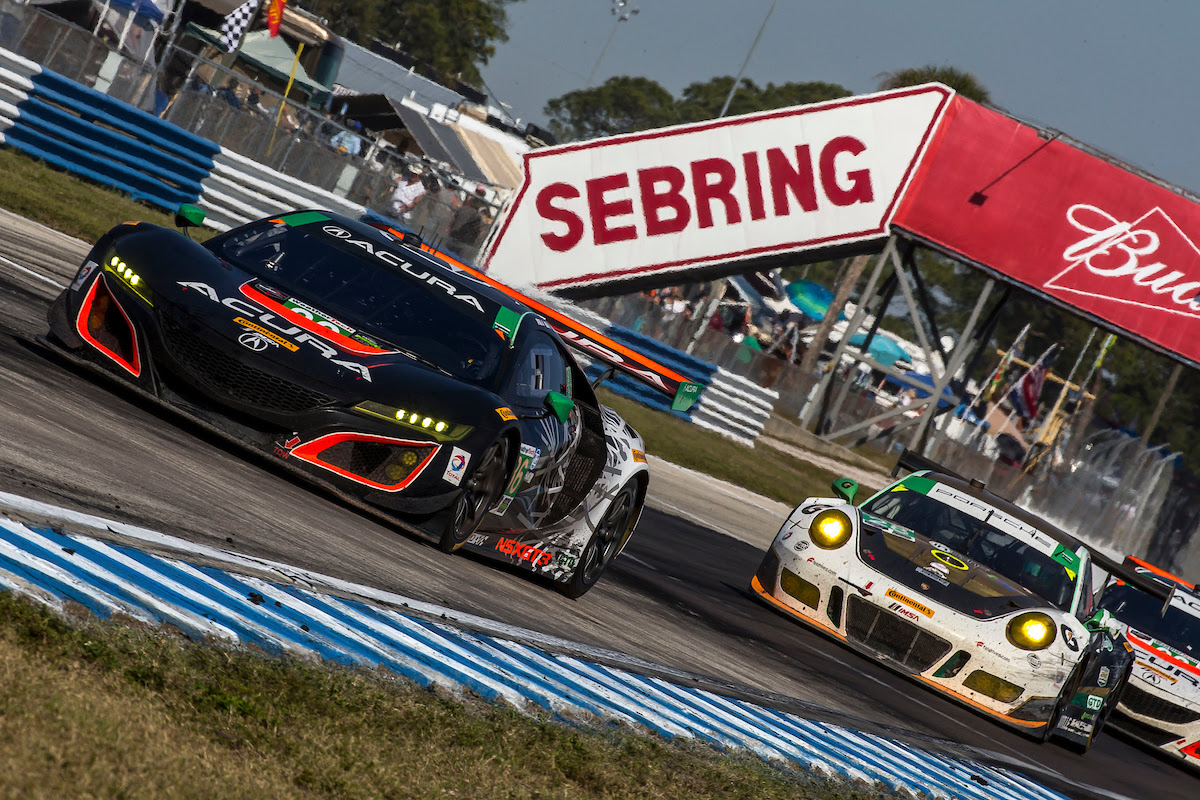 Despite facing challenges throughout Round 2 of the championship at Sebring International Raceway, the Michael Shank Racing team persevered with its two-car effort as the group took in valuable information about the two Acura NSX GT3 machines. The No. 86 of Ozz Negri, Jeff Segal, and Tom Dyer took eighth while the No. 93 of Andy Lally, Katherine Legge, and Mark Wilkins was classified 14th after 12 hours of racing.

The No. 86 effort came back from issues earlier in the weekend which saw the team’s practice sessions cut short – first by a clutch issue, and then by contact. Negri started the race from 13th on the grid and the team ran among the top-10 throughout most of the race as the Brazilian then handed off to Segal and the trio of Shank drivers cycled through their rotations.

Key strategy in the final stages of the race saw the No. 86 return to the lead lap when a full course caution was 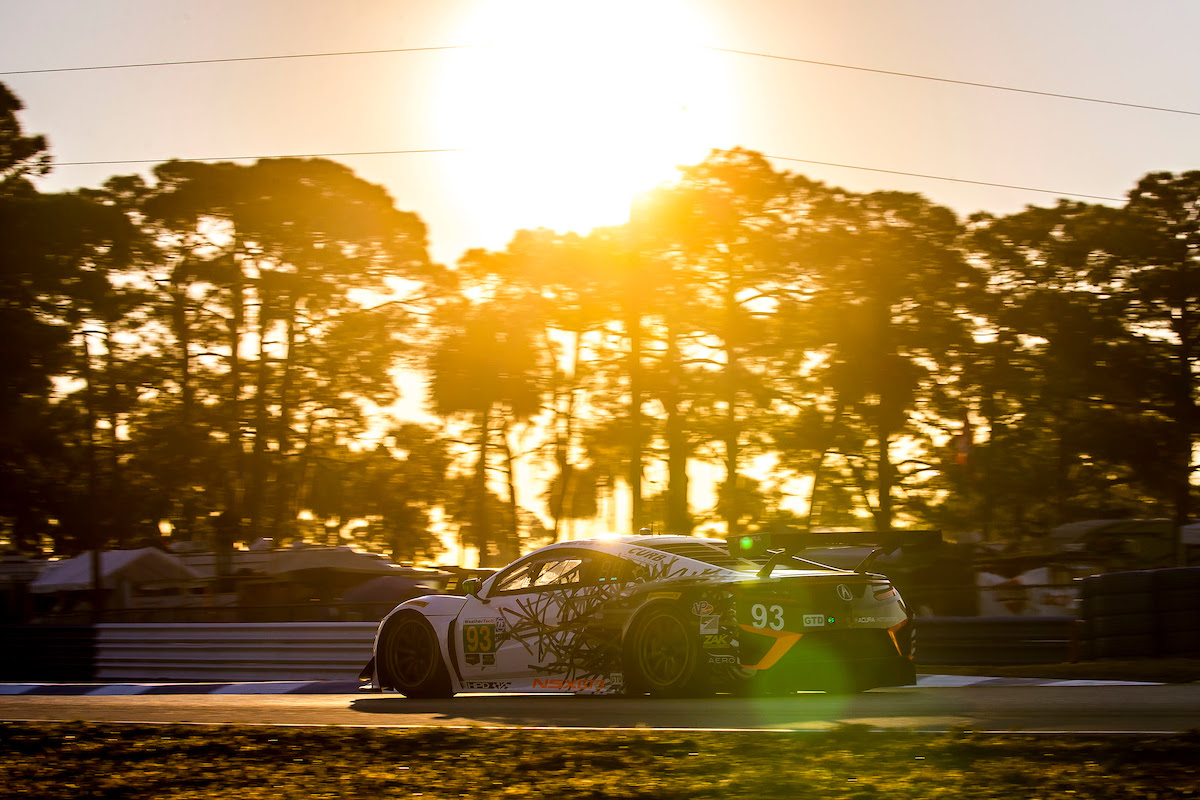 displayed at just the right moment. Once back on the lead lap, Dyer – who was tabbed to anchor the team to the finish – remained in the top-10 and move up to eighth at the checkered flag.

“Fortunately we got our lap back with a couple of hours to go and we just kind of worked the race backwards and short-pitted a couple of times to get ourselves in good position for the finish,” said General Manager, Tim Keene. “I thought we could get closer to the top-five honestly, but we still have some work to do and this was all we could hope for today. So I’m really proud of everybody, we have worked really hard and we will still have more work to do for the rest of the season.”

The No. 93 Acura NSX GT3 once again showed promise in the early going of the race despite some ongoing boost issues. Targeting a top-five finish, disappointment came just prior to the halfway point of the race when the left front shock failed on the Acura machine. 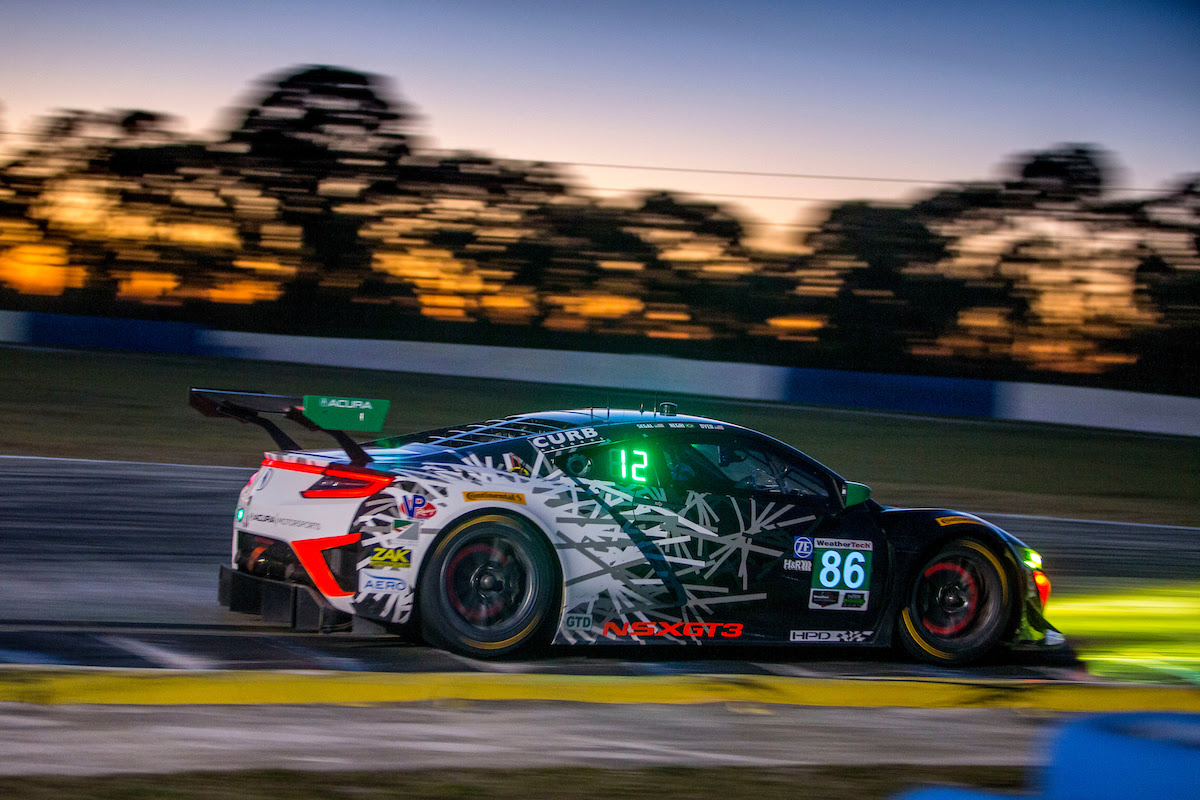 The team spent less than 15 minutes on pit lane for the repair, but the time spent stationary was enough to see the car fall several laps down to the GTD class leader.

“We started out with some turbocharger issues that we had to work on all day, but that wasn’t really killing us, we were able to keep pushing through,” explained Team Owner Mike Shank. “Ultimately it was an issue with the left front shock. But at the end we had a pretty good pace. Having a two car team is really helpful, we are truly able to help each other out both on and off the track.”

Michael Shank Racing was happy to have longtime Prototype driver John Pew with the team during Saturday’s race.

Next up, Michael Shank Racing heads to the streets of Long Beach as the IMSA WeatherTech SportsCar Championship stages its first shorter format race of 1 hour and 40 minutes with the West Coast event April 7-8.

Driver Quotes:
Ozz Negri, No. 86 Acura NSX GT3: “Sebring is the toughest track and our Acura NSX passed the test. We need some BOP help for sure. We finished eighth which is good but nowhere near where we want to be. The team did a fantastic job. The guys on the stand had great strategy and we kept pushing as hard as we could. Jeff (Segal) and Tom (Dyer) did a brilliant job and we are very happy with another top-10 finish. All three of us drivers were within tenths of one another so it was great to have that consistency. I can’t thank my Michael Shank Racing team enough, we had some issues this weekend with the clutch on the first day and then we got hit in practice and they just never stopped working at it.”

Jeff Segal, No. 86 Acura NSX GT3: “It was a pretty difficult day. Coming into this we always knew this was one of the most difficult tracks we go to. Thankfully the weather cooperated so it wasn’t too hot, but we were still taking a beating inside the cockpit. 12 hours here feels like more than 24 at Daytona which is kind of par for the course. We had really pretty good reliability and great pit stops so a big thanks to the team for the excellent preparation of our Acura NSX GT3. Unfortunately we just don’t quite have the pace. It’s disappointing but not really surprising, we kind of saw the writing on the wall all weekend.”

Tom Dyer, No. 86 Acura NSX GT3: “Although this is just my second event with the team, I wouldn’t say I felt a lot of pressure finishing the race off, and any that I might have felt I just channeled into focusing on doing exactly what I needed to do and bring it home clean. It was a bit of a rough weekend for us, we have to get better and I know we will. I am thrilled to be here with Michael Shank Racing and we knew it was going to be an uphill battle. We came away from Daytona excited about our result but we knew that it was a very unique track on the schedule, it doesn’t point to many other tracks we will be competing on. And Sebring is unique in its own right, but I do think it showed us that we can’t let up though. So we have to assess what we need to focus on most and work to develop and improve.”

Andy Lally, No. 93 Acura NSX GT3: “This was a very typical but very exciting Sebring run. It’s always a battle. The last few years I have come here I have come with a pretty sorted race car so to show up at Sebring with a car that has never raced at Sebring is a challenge all of its own. This isn’t an evolution of a car, this isn’t a new model that is still 80% the same as the last, this is a brand new piece of paper that has never raced at the most treacherous track in North America and possibly the world. So I think we did pretty well. Our teammates have come away with back-to-back top-10 finishes and although we have had a bit of bad luck with some teething problems I’m still content with our performance. I’m looking forward to applying the things we learned this week to Long Beach and beyond.”

Katherine Legge, No. 93 Acura NSX GT3: “I’m bitterly disappointed that we had the shock failure because I think we had a top-six car. The team, HPD, Acura and everyone was fighting hard the whole race and we deserved more. Just like Daytona was heartbreaking this is equally as heartbreaking, but we have the fighting spirit and now we just need to get the result to back it up.”

Mark Wilkins, No. 93 Acura NSX GT3: “I’m really happy for the guys in the No. 86, they had another strong result. Obviously our shock issue really took us back a bit. But we fought hard, we didn’t really put a wheel wrong all day and it’s unfortunate to have that issue because I think we could have shown a pretty good result at the end of the day. But we are learning and Sebring is a tough place. So a big thanks to Michael Shank Racing, Honda, Acura and HPD for giving us a great race car. Every event we do we keep improving and I’m looking forward to a good run at Long Beach.”