Patakskala, Ohio (2 May 2017) — Sometimes even someone as driven as Mike Shank can use a push.

And when it comes to pursuing a Verizon IndyCar Series program, a key player providing that push has been Brian Bailey.

Bailey, who has owned and operated Rocky Fork Company – a New Albany, Ohio landscaping and 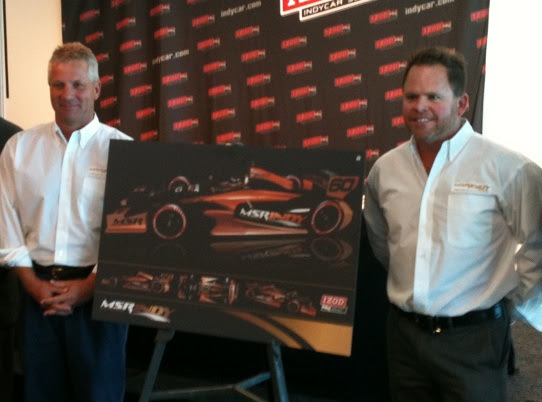 fencing company – for over 25 years, was a lead instigator of the original Michael Shank Racing effort to go IndyCar racing in 2012.

Similar to Shank, Bailey’s passion for racing was inspired by his time spent at the nearby Mid-Ohio Sports Car Course. He helped Shank secure the financing required for the initial investment into a Dallara DW12. But when there was no appropriate engine supply option to support the effort, the dream to get to the Speedway was put on hold.

Despite the setback, Bailey never relented and continued to be an ardent supporter of Michael Shank’s racing efforts in IMSA through the years.

“Brian (Bailey) has been an integral part of this team for over seven years now,” said Shank.  “It just grew from his interest in the team and then he got more active with us and when the original 500 opportunity came about, he was 100% on the throttle for it to happen! So it was disappointing when that didn’t work out but he stuck with us and now here we are with a chance to go race in the Indianapolis 500.”

Michael Shank Racing, which has over 250 IMSA race starts, raced and led laps in the 2016 24 Hours of Le Mans and then won the prestigious season-ending Petit Le Mans overall last year before moving to the GTD class with the new Acura NSX GT3 program for Acura Motorsports this season. Bailey has been along for the team’s incredible ride and even helps out as a crew member at some of Michael Shank Racing’s events.

“I was the dead man (fuel vent safety valve) for Mike (Shank) when he won the Rolex 24 – and I darn near blew it!” recalls Bailey with a laugh about nearly missing a pit stop on the way to Daytona’s Victory Lane. “I was talking with AJ (Allmendinger) and Justin (Wilson) and somehow missed the radio call that we were pitting. Suddenly the car was coming – I don’t think I’ve ever ran so fast! But thankfully I was in position in time for the stop – but not without a lot of laughter from AJ and Justin!”

As a business owner, Bailey has long recognized the role that good people play when it comes to successful companies, no matter the business.

“Mike (Shank) has put together an outstanding group,” offered Bailey. “The more you learn about racing and the way that some team owners operate, the more I’m impressed by the fact that most of Mike’s guys have been with him for more than a decade. This is a very tough business, so to have that kind of loyalty is incredible. And that longevity is evident in how the team operates, it’s impressive.”

With the 500 dream now much closer to a reality, Bailey is understandably excited about the opportunity ahead for the team.

“It’s just cool for Michael Shank Racing to have the opportunity to go to the Indianapolis 500 and race,” said Bailey. “And this is not a team that stops at just showing up—this is a huge effort and one that is focused on a big result. I’m thrilled to be a part of it and more to the point, thrilled for Mike and Mary Beth (Shank). And who knows what might come from this.”

The long term personal relationship that developed into commercial support for the team is something that has been a common thread for Michael Shank Racing, as the team has grown its partnerships with a number of companies that are based in Columbus.

“We have a kind of ‘Spirit of Columbus’ car going I guess, with Rocky Fork Company, CAP & Associates, and Roberts Service Group all behind us,” said Shank. “It is great to have these family-owned, successful Columbus-based companies all recognize the value of being a part of our team and for them to step up to be part of this Indianapolis 500 program. I’m grateful for the support and also very driven for it to be a success for them.”

Michael Shank Racing will compete in Austin, Texas for Round 4 of the IMSA WeatherTech SportsCar Championship at Circuit of the Americas this weekend. The team will then move over to the Indianapolis Motor Speedway on May 11 to begin preparations for the 101st running of the Indianapolis 500.