INDIANAPOLIS (26 May 2017) – While the focus is often on the drivers competing in the Indianapolis 500, all eyes were on Michael Shank Racing Crew Chief Adam Rovazzini on Friday when he was presented the Clint Brawner Award during the annual Carb Day festivities at the Indianapolis Motor Speedway. 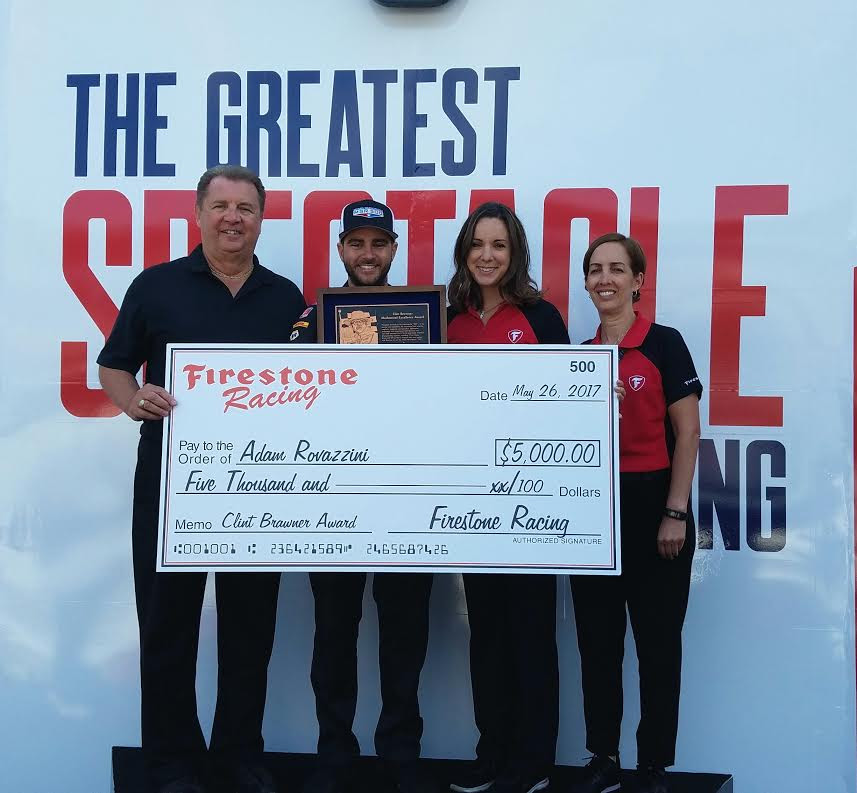 Rovazzini was selected by the Clint Brawner Foundation which recognizes an Indy 500 chief mechanic who “exemplifies the mechanical and scientific creativity, ingenuity, perseverance, dedication, enthusiasm and expertise” of its legendary namesake. Clint Brawner was chief mechanic on winning cars in 51 AAA- and USAC-sanctioned national championship races, and six season champions.

As part of Carb Day, Rovazzini was recognized on the IMS victory podium just below the iconic Pagoda and presented a $5,000 check for his contributions to the Michael Shank Racing team’s debut Indianapolis 500 effort.

In addition, Rovazzini will have a plaque with his name added to a permanent trophy housed in the Indianapolis Motor Speedway Hall of Fame Museum.

“Adam’s (Rovazzini) experience is very well known and his dedication is well known,” said Michael Shank Racing Team Manager Tim Keene. “He knows most everyone in the IndyCar paddock and has a very good reputation. He is very dedicated and we’re very lucky to have him as part of our

effort. The transition from our IMSA program to our IndyCar program was very seamless because Adam has a lot of experience here and is familiar with the cars. From the whole technical side to the different procedures, the transition has gone very well and we’re lucky to have Adam leading that side of it for us.”

Rovazzini spent 13 years working as a mechanic for Chip Ganassi Racing – winning the 2008 Indianapolis 500 and IndyCar championship with driver Scott Dixon. In 2015, he was the crew chief at KVSH for the late Bryan Clauson.

Michael Shank Racing fields the No. 50 Honda Dallara of rookie Jack Harvey with support from Andretti Autosport. The team faced a bit of an uphill climb during the first week of Indianapolis 500 practice when faced with a steering issue and then an engine issue. But the perseverance of the team, led by Rovazzini, saw the effort back out on track in no time.

Harvey qualified 27th for the 101st running of the Indianapolis 500 and the Michael Shank Racing team had its most positive day of running during the final practice day on Monday with Harvey completing 124 laps in traffic.