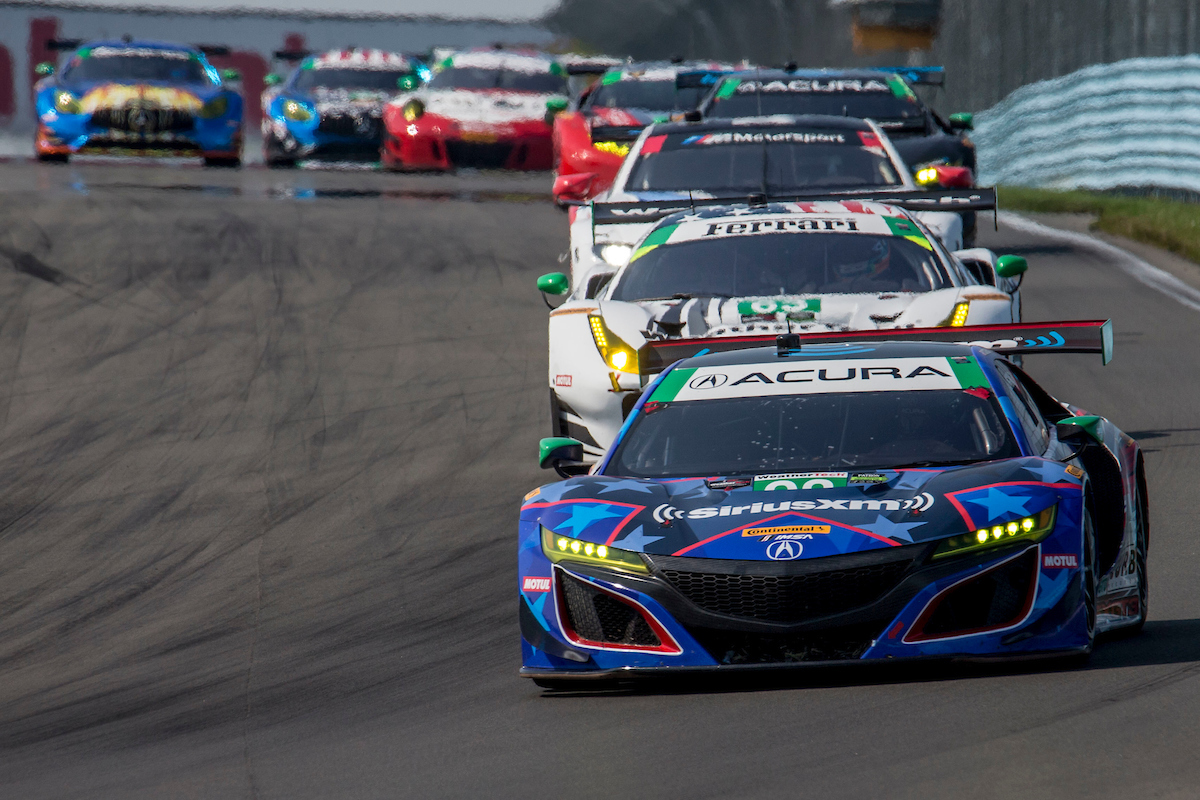 Coming into the six hour classic, which marked Round 5 of the IMSA Weathertech SportsCar Championship for the GTD class, Meyer Shank Racing (MSR) had two strong Acura NSX GT3s, both of which were in contention for the GTD victory. With temperatures nearly reaching 100 degrees, the team knew it would not be an easy feat but adapted to the blistering conditions.
After setting the fourth and fifth fastest times during Saturday’s qualifying session Alvaro Parente (No. 86 Meyer Shank Racing Acura NSX GT3) and Lawson Aschenbach (No. 93 Meyer Shank Racing Acura NSX GT3) took over driving duties for the initial stages of the race.
The first round of pit stops at the 30 lap mark saw the MSR squad shine as Aschenbach picked up two positions during his stop while Parente gained one position upon reentering the circuit.

Both team cars opted for a double stint strategy which saw both MSR machines lock into the top five before the second round of stops. The 58th lap saw the No. 86 pit for four tires and fuel as well as a driver change with Katherine Legge getting behind the wheel. Two laps later, Aschenbach pitted for the same changes with Justin Marks set for driving duties of the No. 93.

Marks was on a charge, taking over the lead on Lap 65. Unfortunately for the Detroit podium finishers, the drive up front only lasted 17 laps before Marks was removed from the lead after being taken out by a Prototype and damaging the front suspension. The team made every effort to repair the damage, but the decision was ultimately made to retire the No. 93 from the race.

“We had a really, really good day going for us,” said Marks. “When the track got hot and we got a run, the car came alive for us. The team did an amazing job with pit stops and pit strategy to get us the track position and give us the opportunity to lead the race. Unfortunately, we got taken out by a prototype while in the lead. I was in a lot of traffic so I left a lot of room and left time on the table to make sure something like this didn’t happen. It’s a bummer but that’s racing and we will turn that around to win at CTMP.” 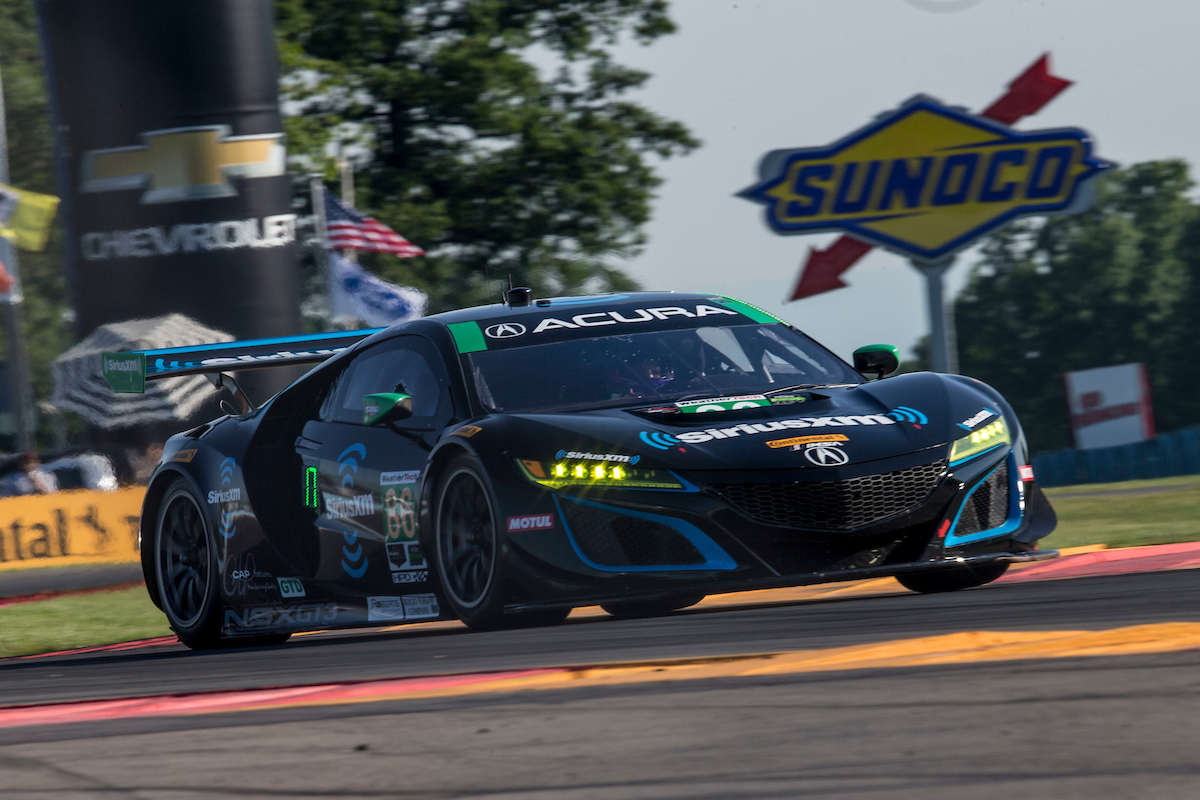 Aschenbach was beyond proud of his crew for their outstanding work on pit stops and strategy which provided him with a car in contention of a victory.

“The beginning of the race was really good and going according to plan,” said Aschenbach. “The car was running very well after we made a few minor changes on the pit stop, but the guys killed it. It was exactly what we needed and we jumped two spots. The strategy call was perfect and Justin (Marks) was doing a great job on that third stint and just pulling away. The team has done an amazing job this weekend. I am so glad to be running the Acura NSX GT3 with Meyer Shank Racing. It’s disappointing how our weekend ended but it just wasn’t meant to be.”

Left as the sole team contender, the No. 86 Acura NSX GT3 made every effort to provide the team with another victory. The entry led a total of 33 laps and spent 127 laps in the top three. Legge put in a hard charge that was called the “drive of the race” by the Fox broadcast team as she dealt with a slippery circuit and a hard charge from the pole-sitting Lexus.

Closing out the event, Parente worked his speed to hold onto second place until the checkered flag was flown after 186 laps of full out racing to close the Sahlen’s Six Hours of the Glen. The podium finish was paired with the team’s second Tequila Patron North American Endurance Cup round win.

“It was a very hard race and I don’t think we had the ultimate pace,” said Parente. “I think we had a great finish for the pace we did have. We are more than capable of winning the championship and looking forward to trying to accomplish that.”

“I am super proud of this team and their fighting spirit,” said Legge. “I am very proud of second and it’s great points for the championship. Having the win dangled in front of us was a little difficult but this team has done such an incredible job this weekend and we are looking forward to bringing this same pace to CTMP next week.”

Despite losing one team entry due to damage, Mike Shank is proud to have scored another podium finish and knows that there is more pace to come. 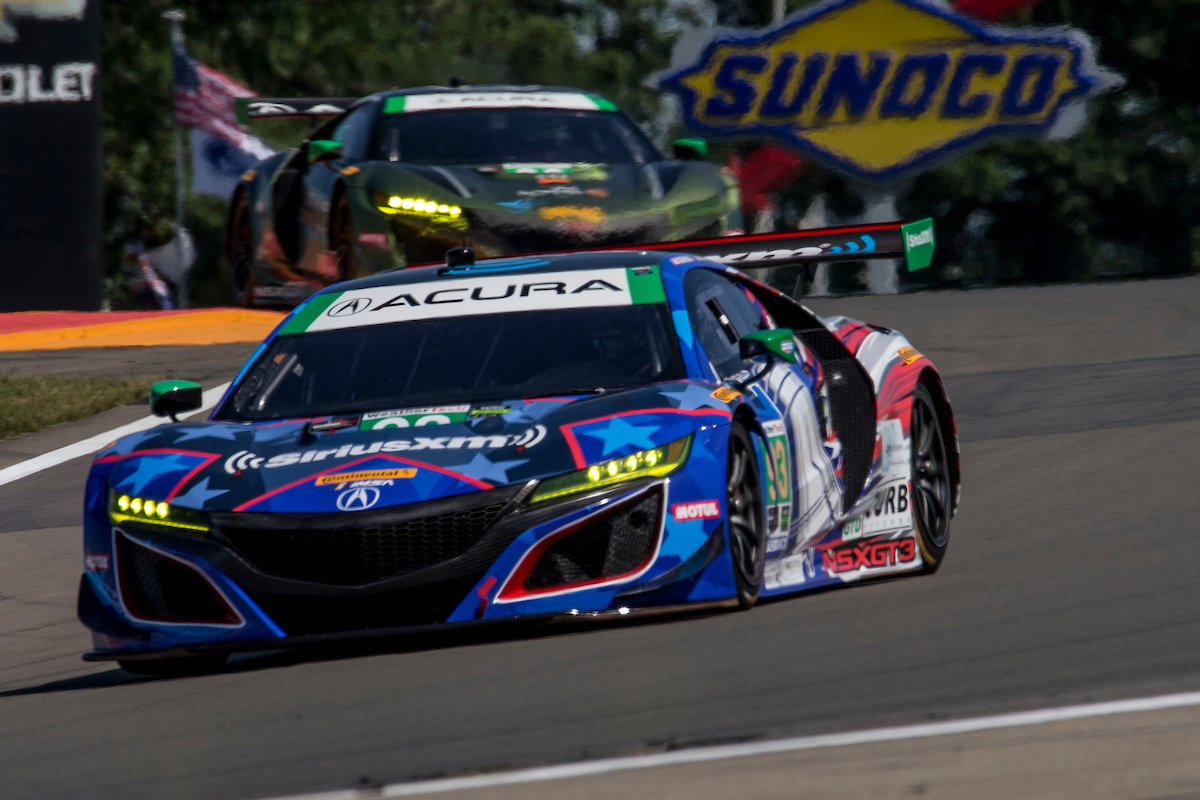 “The No.93 started out awesome and was in the lead when it was taken out by a Prototype so that was really frustrating after Justin (Marks) had it out front,” said Shank. “The pit stops from the guys were perfect all day long and the sacrifices the drivers made all day long in this heat with two driver combos on both cars were really amazing. Alvaro (Parente) and Kat (Legge) just kept fighting. We didn’t quite have the pace today and those guys and the crew just kept putting themselves in contention. At the end we could hold them off but we are happy with this weekend. Going to Canada we are looking to take the championship lead.”

The IMSA WeatherTech SportsCar Championship will return to action in just five days as the series heads to Canadian Tire Motorsports Park for Round 6 on July 6th – 8th.