Long Beach, Calif. (8 April 2017) – Basking in the sun-soaked southern California streets of Long Beach on Saturday, it looked like Michael Shank Racing’s race day would shine just as brightly as the team’s two-car Acura effort was poised for a double top-five result in the 100-minute BUBBA Burger 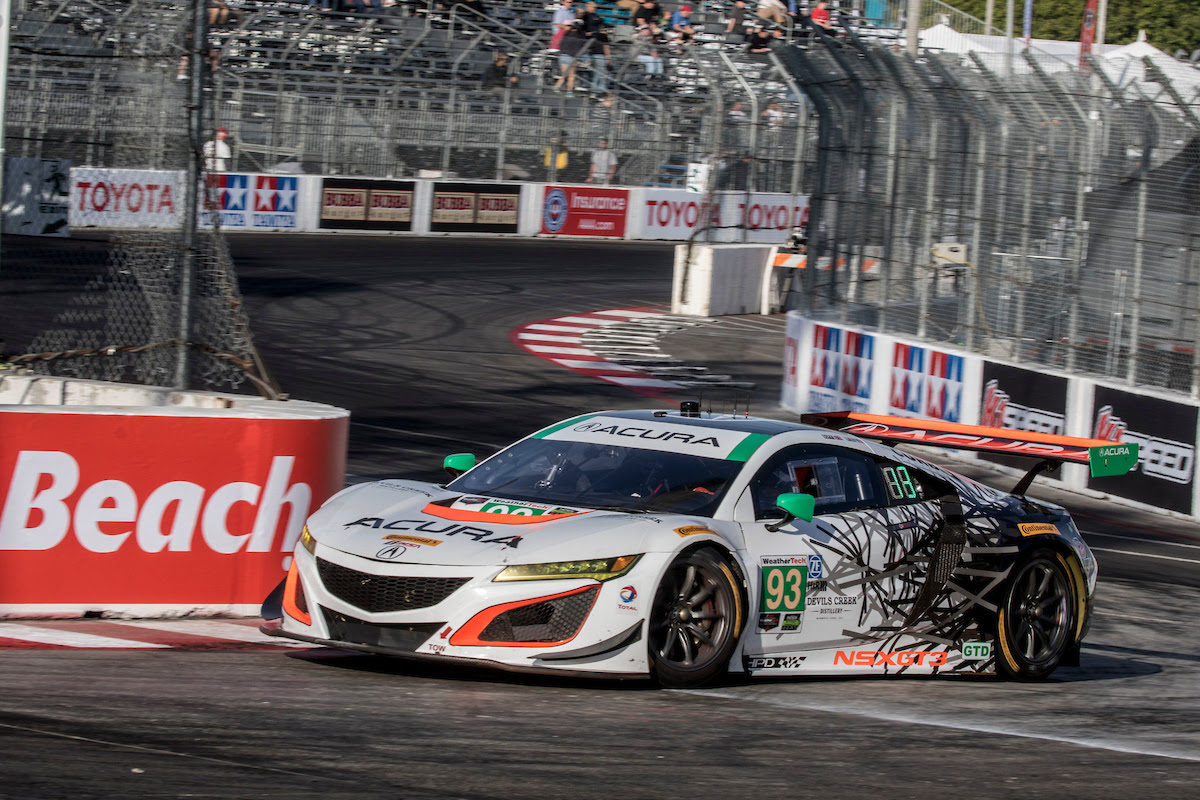 Unfortunately, those anticipated results did not come to fruition in Round 3 of the IMSA WeatherTech SportsCar Championship when a desperate move from a fellow GTD competitor took the No. 86 Acura NSX GT3 of Ozz Negri and Jeff Segal out of the race in the final corner and a late-race miscue saw the No. 93 Acura NSX GT3 of Katherine Legge and Andy Lally fall from third to 11th in the order.

The No. 93 Acura machine recovered to take seventh at the checkered flag.

Legge opened the race from the fourth row after qualifying the No. 93 machine eighth on the grid. Setting 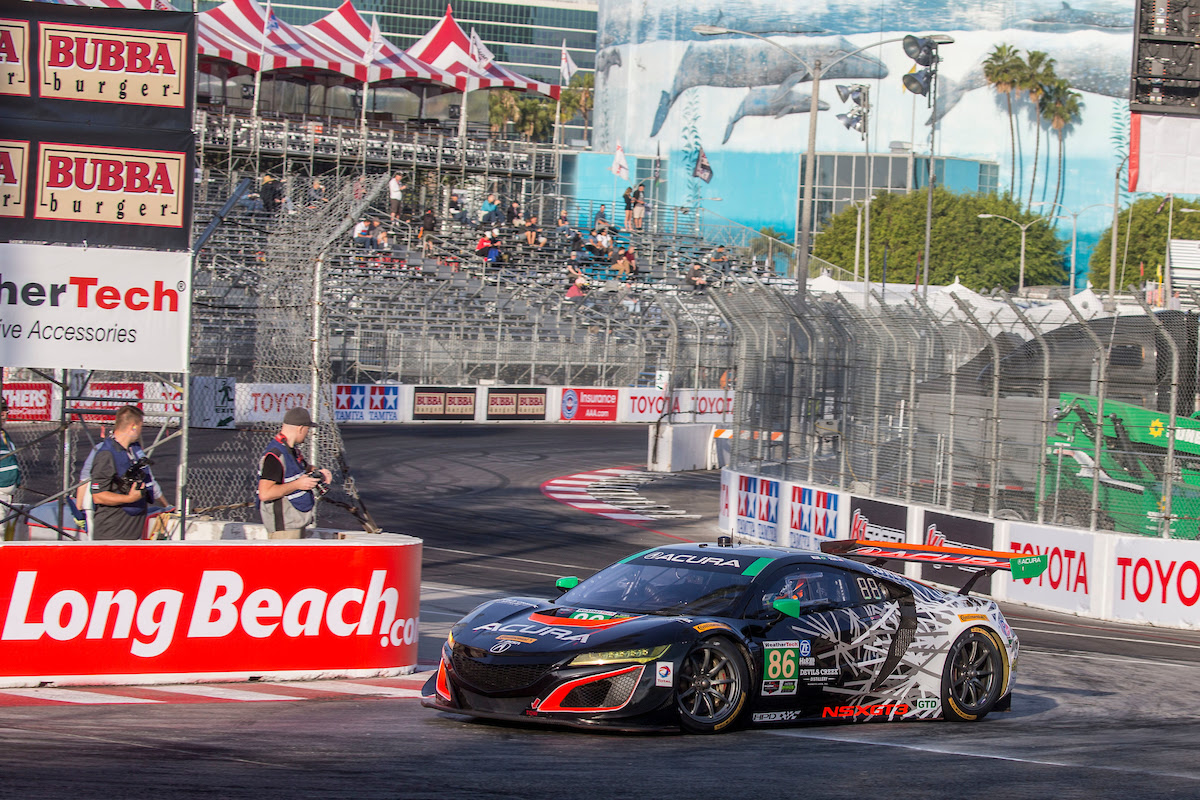 quick lap times, Legge made her way up to fifth in the order before handing the car over to Lally with just under an hour remaining.

During the stop, the team changed just one Continental Tire – the left rear – which was the only tire change of the race. Lally had progressed up to third when a full course caution was displayed. During that yellow period, the GTD field was given a wave around the pace car but a miscue saw Lally miss it and he found himself 11th in the order upon the final restart.

“I can’t be happy enough about the gains we’ve made with the cars from Sebring to here – it’s unbelievable,” said Team Owner Mike Shank. “We’re talking 30-40% better on a rough street course so I’m really happy about that. The pace was good, the strategy was good, we had a couple of little mistakes early but on the No. 93 we missed what’s called the pass around in our series and that screwed up our race. The good news is that we had the potential of running first second or third without question. Andy (Lally) did a great job and to me, Katherine (Legge) had the drive of her year so far. It’s hard to take 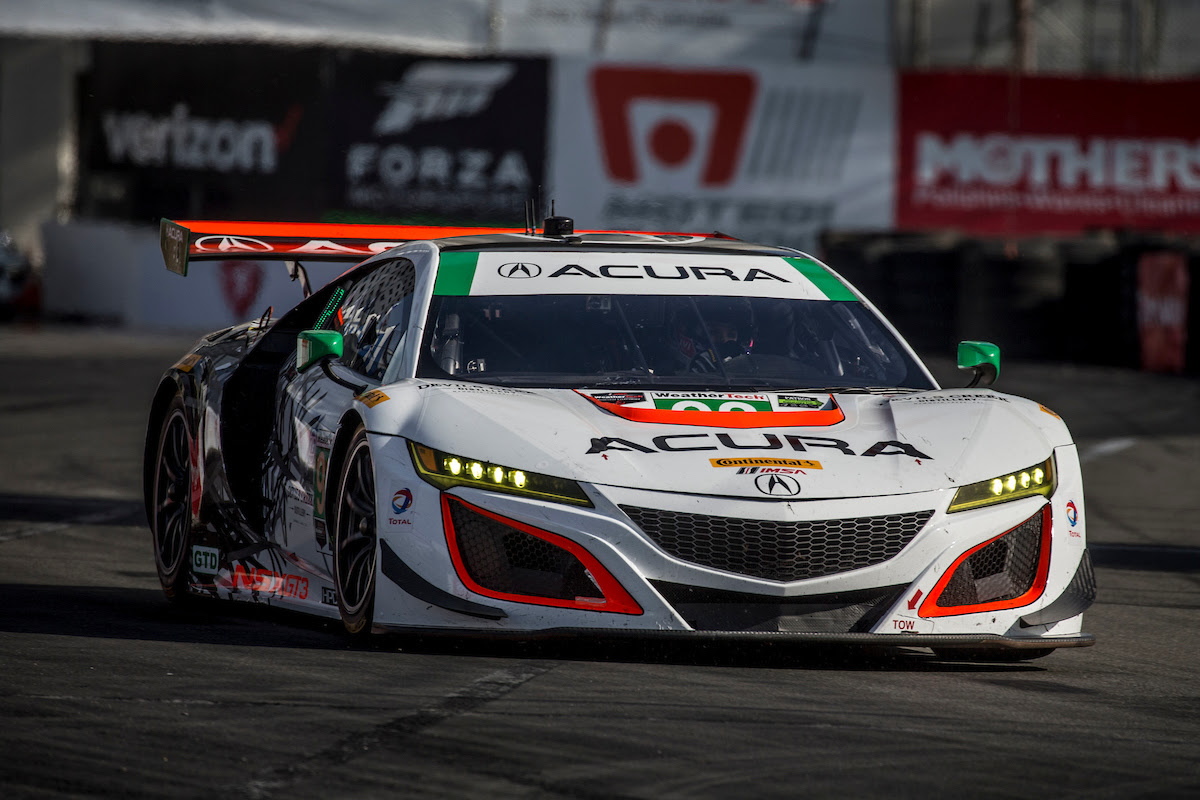 because at this level you can’t have mistakes like this. We’ll learn from it. We get one, and then we have to learn from it and not do it again.”

After battling a loose car in qualifying, Negri opened the race from 14th on the grid in the No. 86 Acura NSX GT3. Negri ran among the top-10 until he turned the car over to Segal with about 56 minutes remaining in the race.

Segal immediately went to work at the wheel of the Acura NSX GT3 and put down lap times faster than the GTD class leaders. He had made his way up to sixth on the final lap, when an overly aggressive maneuver from the No. 15 GTD entry saw Segal taken out in the final corner, along with another hapless victim in the No. 96 GTD entry.

“We had a decent race going, we were set up for a top-five finish – we knew we’d be at least sixth,” said Michael Shank Racing General Manager Tim Keene. “We made smart decisions all day and got ourselves in a good position so to get taken out by someone making a really, really bad decision is more than frustrating. We still have some work to do with the car but I’m proud of everybody on this team. We just have to put this behind us and move on to COTA and the remainder of the season.”

All four Michael Shank Racing drivers and Team Owner Mike Shank will visit HPD and American Honda on Monday during the group’s West Coast tour. The team will then head up to Mazda Raceway Laguna Seca for a test ahead of the next IMSA WeatherTech SportsCar Championship round at Circuit of the Americas May 4-6.

DRIVER QUOTES:
Katherine Legge, No. 93 Acura NSX GT3: “It was good – it’s really difficult on a street course to pass or get passed so it was just about trying to be smart and maximize track position. We had a good strategy, I’m just gutted for the whole team. We had a great driver change, we were fast, and we were closer to the front than we have been so far. So we can take the positives and move on. For me personally, from Daytona to Sebring I made a big improvement and from Sebring to here I’ve made improvement so I just need to keep my head down and keep learning these GT cars.”

Andy Lally, No. 93 Acura NSX GT3: “I know the result isn’t what we wanted because we had a little miscue but I could never ever be mad at any of these guys for anything. I mean I made a big mistake yesterday, we’ve all made mistakes. It happens. I actually came in with a smile on my face, it was a good time. We’ve shown huge improvement. Katherine (Legge) was flying in the first stint and set amazing lap times. We over delivered for our third race ever with this car. The Michael Shank Racing guys put the Acura in a really good position. We changed one tire for the whole race while other teams took two or four tires. We took a gamble for our strategy and it worked out the way it was supposed to and we were sitting pretty. It’s just that miscues happen and it’s onto the next one.”

Ozz Negri, No. 86 Acura NSX GT3: “Usually you see me smiling but I’m not smiling today. I’m actually very frustrated. We were running P6 but in the very last corner, our car got drilled by a desperate competitor. It’s very disappointing after all the hard work that Michael Shank Racing and everyone at Acura and HPD put in this weekend. It would have been a great place to get a top-five, not only because of the result, but it would have given us a lot of points which would jump us quite a few positions in the championship so I’m very upset about it.”

Jeff Segal, No. 86 Acura NSX GT3: “I’m really disappointed because we had a challenging practice and qualifying but like we’ve done so far this season, we executed really well in the race. We were just chipping away and picking off positions here and there and were looking at a top-five and pretty content to take those points on a weekend where it looked like we didn’t have the pace we needed. I’m just gutted for the team that we have a torn up race car and nothing to show for it. I don’t understand the decision making process to wipe out three perfectly good cars for sixth place, somebody from the other team will have to explain that to me, but we’ll focus forward on the next one.”