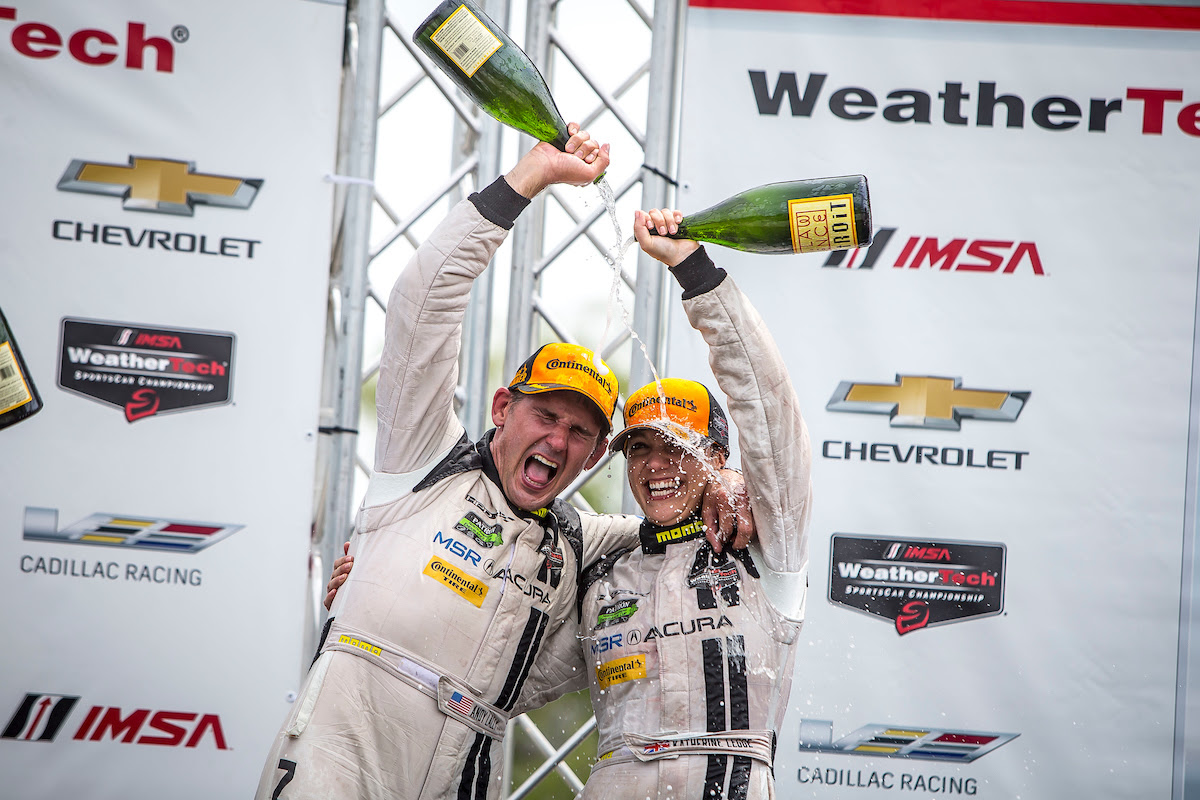 Further bolstering Michael Shank Racing’s victory in Detroit, was the fifth place finish of the sister No. 86 Acura NSX GT3 who ran in podium contention all the way up until the final two laps.

The weekend started out well for Michael Shank Racing when Legge put the No. 93 machine on the front row for Saturday’s 100-minute sprint through the streets of Belle Isle. The No. 86 was forced to play catch up after the team was not able to set a qualifying time and started at the rear of the grid.

Legge kept the car toward the front of the field in second for the entirety of her stint, while Negri, who 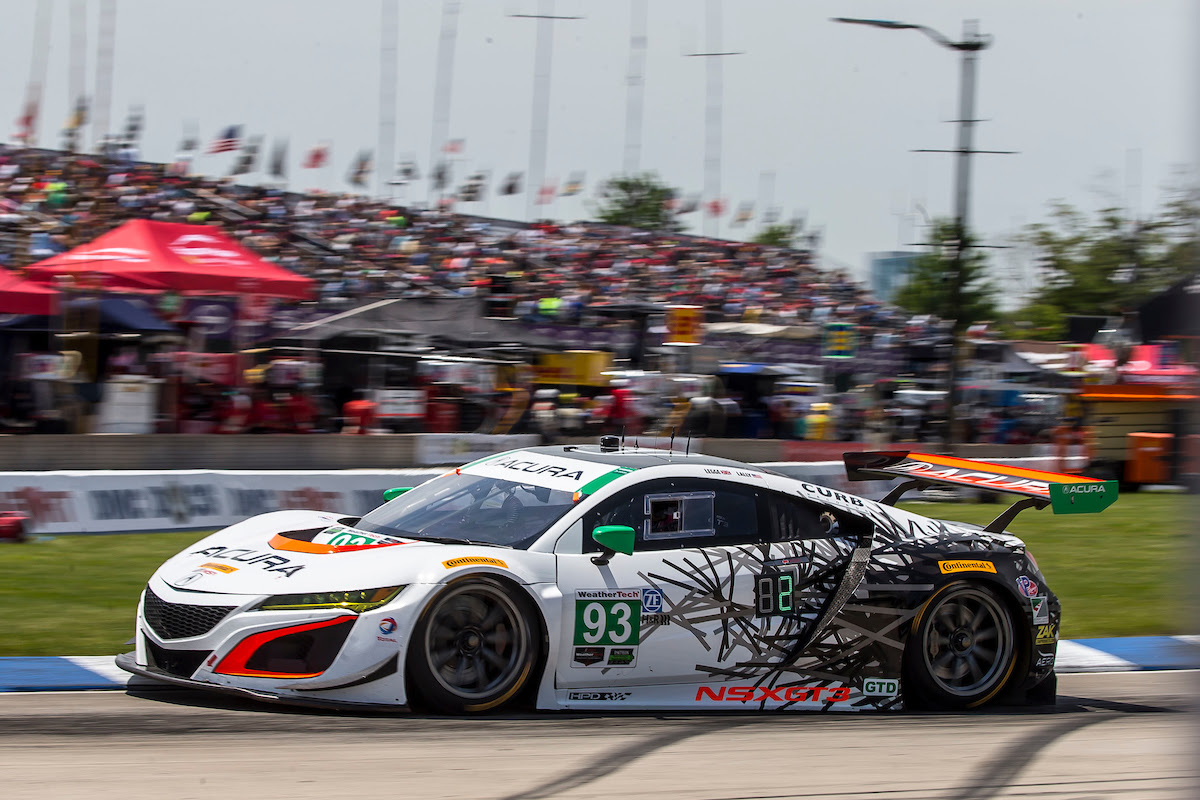 opened the race in the No. 86 Acura NSX GT3 focused on conserving fuel as he wheeled his way around the 2.35-mile concrete lined circuit.

A strategy call from the pit box was the key to the race when both Acura NSX GT3s pitted during the first and only caution some 30 minutes into the race. The No. 93 opted for left side tires only, while the No. 86 took no tires at all.

“The pit stop was key for both cars, we just smoked them off of pit lane,” said Team Owner Mike Shank. “We called an audible when we called for two tires when we saw that caution. We knew we weren’t going to take as much fuel which maximized what we knew our fuel flow could be to how many tires we could get on in that time frame. And of course the 86 went from 12th to sixth by taking fuel only. When you keep the car on the ground (by not taking 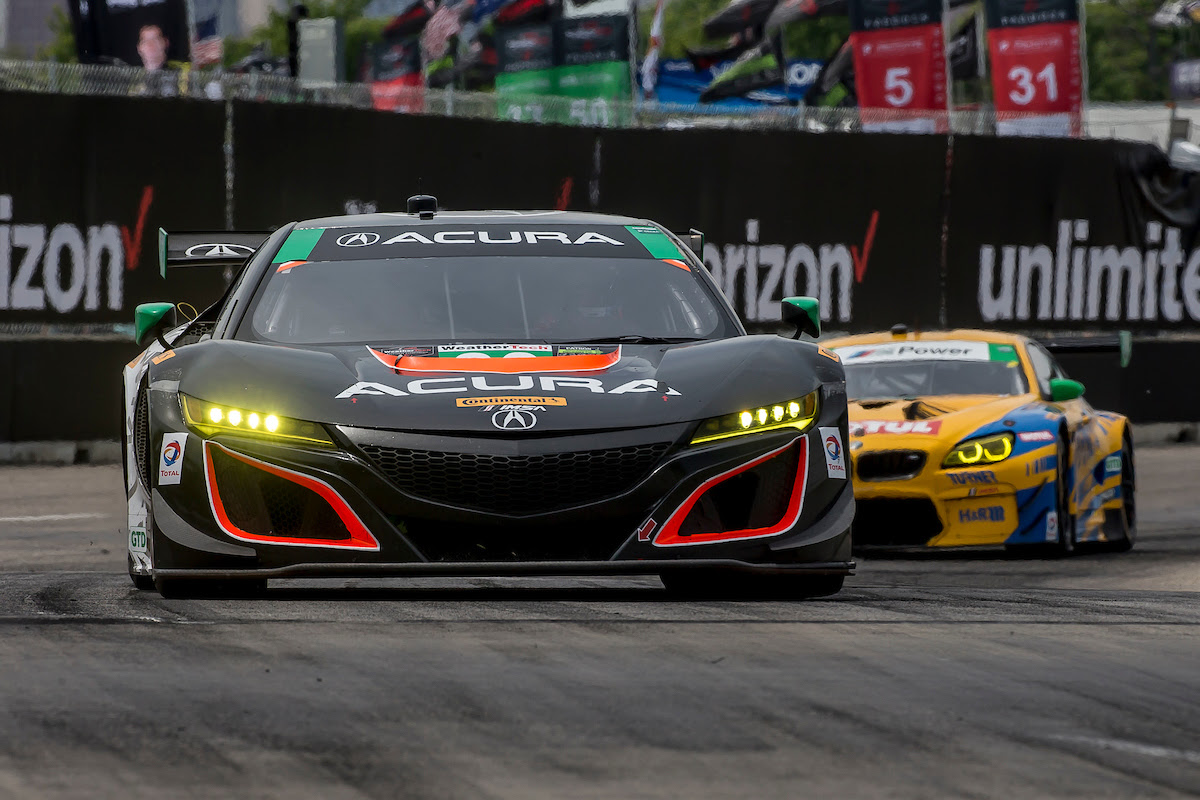 tires), the flow of fuel is a lot quicker. They kept the car low, got it filled and got out.”

Those strategy calls saw Lally take to the track as the GTD class leader while Segal took control of the No. 86 which had entered the pit lane in 12th and leapt up to run sixth for the restart.

Lally initially defended for several laps to maintain the lead position but eventually extended his leading margin to nearly two seconds and led 42 laps. Meanwhile, Segal who moved up to fourth early in his run, found himself in third when the No. 57 GTD which had run third, slowed. What looked to be a double podium finish for Michael Shank Racing was thwarted when the fourth place No. 48 GTD car nudged the No. 86 from behind with less than three minutes remaining which was enough for Segal to fall to fifth in line.

“I’m just so grateful that our team, Michael Shank Racing, gets the win for the Acura brand today,” added 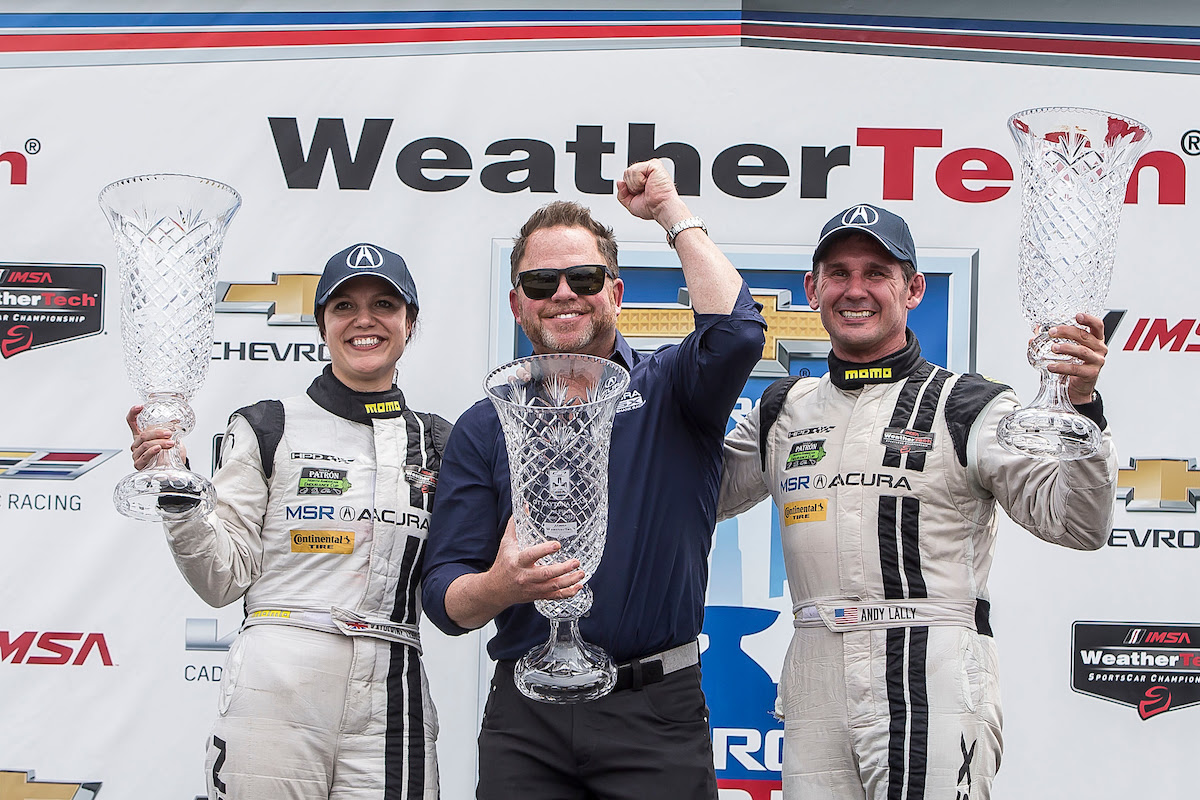 Shank. “You could almost feel it around this place, everyone was really, really calm before the race, it was almost too quiet! We are really making advancements on the car and I am just so thrilled for the team. Everyone from the drivers, to the crew guys, to the engineers, everyone did what they needed to today.”

Michael Shank Racing will look to carry its winning momentum with them into the next IMSA WeatherTech SportsCar Championship round – the Sahlen’s 6 Hours of the Glen on June 29 – July 2.

Andy Lally, No. 93 Acura NSX GT3: “Acura did an amazing job. Michael Shank Racing has done a great job. Everyone from HPD have been full tilt on this program. The crew made a fantastic pit stop. We’ve had quite an up and down year. We’ve had some things go wrong at bad times, but today, everything went right. I’m so happy for these guys. Kat (Legge) did an amazing job. She helped me get faster this weekend. I found some things she was doing and applied it to what I was doing. I did not think we were going to be here (on top of the podium) at the beginning of the weekend. Our engineers did a great job, we just put our heads down and drove it. Hats off to Kat for putting us in the right position to come out in front. She did an amazing job as well. I told the guys, we have a really well balanced car. You’re going to maybe beat up the back tires here. You can balance the car with the throttle, so having a neutral car is huge. What we’re lacking is downforce with the Acura, the guys have worked on strengthening the mechanical grip. That was what was critical for us here. Remember, this is the fifth race for Acura and maybe 10th in the world, so to come in first shows how critical the development of the car is and how far we’ve progressed in a short time.”

Katherine Legge, No. 93 Acura NSX GT3: “This is a testament to the team. Michael Shank Racing gave us a car that was capable of winning. The team has really been working hard between each race. We’ve been strong at points, but today we put it together. Today was the longest hour of my life watching Andy (Lally) drive. I was telepathically talking to him. It was harder to watch than actually drive! Thank you to everyone who has given us a chance to put together this car and this ride.”

Ozz Negri, No. 86 Acura NSX GT3: “It was tough being so close to so many other GTD cars because you are fighting for clean air. When you are so close you tend to push off and you just have to manage that. I tried to get a run and trade places with a couple of guys. The car felt good, and we had the pace, I was just getting hung up on the guys in front of me. Out pit stop was just spot on, it was amazing. Congratulations to Andy (Lally) and Katherine (Legge) – just a fantastic job by everybody.”

Jeff Segal, No. 86 Acura NSX GT3: “The car was working unbelievably well so full credit to the Michael Shank Racing guys. We had some setbacks this weekend and the crew worked incredibly hard not just to get the car back on track, but to make the car fast. We were just getting faster and faster as the fuel burned off. It’s really a shame we got dumped off by a competitor and that’s not the way I race and that’s not the way I thought we were supposed to race. The car was a little bit of a handful at the end without new tires. The Acura NSX GT3 is really well balanced which helps so we were able to wear the Continental Tires evenly. You could definitely tell we had less grip than the other cars because the tires were so old. We were hanging in there, we had the pace of the leaders if not more. I am really happy the No. 93 car could take the win, it’s definitely well-deserved by this entire group. It would have been that much sweeter to have a double podium, we were there and we would have had it.”