Braselton, Ga. (7 October 2017) – With hundreds of fan signatures on board each of the Michael Shank Racing Acura NSX GT3 machines, the team aimed for a return to Petit Le Mans victory lane on Saturday to follow up the organization’s win in last year’s event. The 20th Annual Petit Le Mans marked the final round of the 2017 IMSA WeatherTech 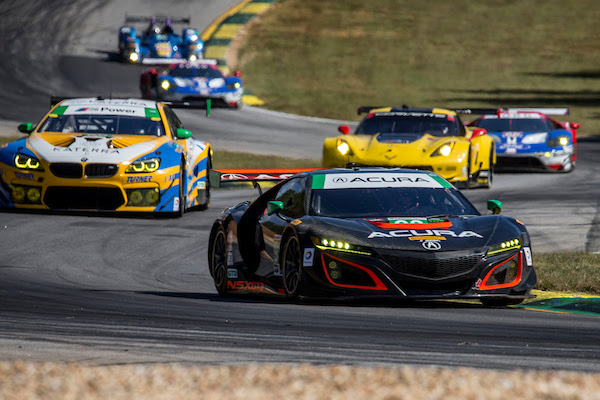 SportsCar Championship in which Michael Shank Racing delivered the first-ever victory for the Acura NSX GT3 at Detroit, won the Sahlen’s 6 Hours of the Glen, took two runner-up finishes and scored a pole position in the team’s debut GTD season.

In a race that saw a range of conditions from rain falling just prior to the drop of the green flag to cool temperatures, warm temperatures and even brief bouts of sunshine, both Michael Shank Racing Acura NSX GT3s showed strength.

The No. 93 Acura NSX GT3 of Andy Lally, Katherine Legge, and Mark Wilkins dominated the first five and a half hours of the race and led 145 laps as the trio worked through their 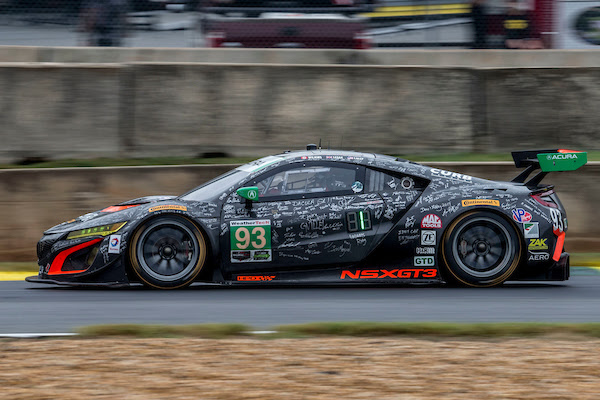 driver rotation. Lally opened the race from the front row after putting the No. 93 Acura NSX GT3 second on the grid and immediately took over the race lead in some tricky wet weather conditions.

But the track dried quickly and Lally maintained the GTD class lead through his 2 hour and 25 minute long stint. He handed the car over to Legge who also ran at the front throughout her entire stint as she maneuvered through the abundant multi-class traffic.

Legge turned the car over to Michael Shank Racing endurance driver Wilkins, who looked to run a clean and trouble free stint. He also ran at the front of the GTD class prior to a Lap 210 pit stop that saw the Michael Shank Racing team square up on strategy and take on more fuel than the others. That saw Wilkins return to the fray right in the mix – sixth in the GTD order.

Unfortunately, the aggression of Wilkins’ fellow GTD runners caught the No. 93 out when the No. 54 GTD entry locked wheels with the Acura NSX GT3 machine in Turn 4 and it launched the Acura hard into the barriers. The No. 93 Acura NSX GT3 sustained heavy front-end damage, but it was a testament to the safety of the Acura when Wilkins emerged from the car unscathed.

Meanwhile the No. 86 Acura NSX GT3 of Ozz Negri, Jeff Segal and Tom Dyer had looked to close out the 2017 season on a high note, but the fan-favorite gold & black liveried machine fought an uphill battle. Despite setting laps on pace with those of the 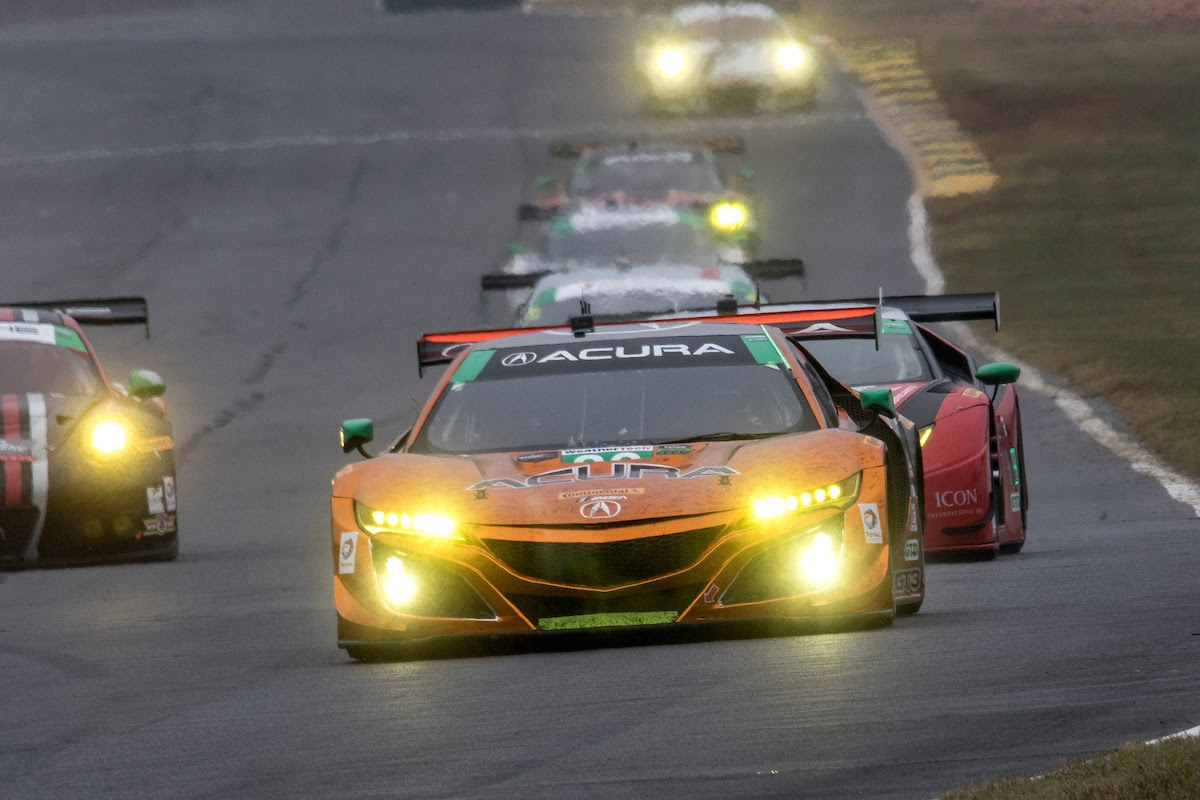 leaders, the rough and tumble nature of the classic 10-hour endurance race bit the team early on.

Negri opened the event through the first two hours as the slicing and dicing 39-car combined class field ran at a blistering pace around the undulating 2.54-mile circuit. With significant damage to the front splitter caused by attrition during the opening segments, the No. 86 car entered the pit lane for routine service after two hours of racing. Negri handed the car over to Segal, who upon returning to the track, determined that the front end needed to be repaired.

The Michael Shank Racing crew went to work in the garage and made the massive repair in just 25 minutes, but the time spent behind the wall saw the car fall 16 laps down to the leader. 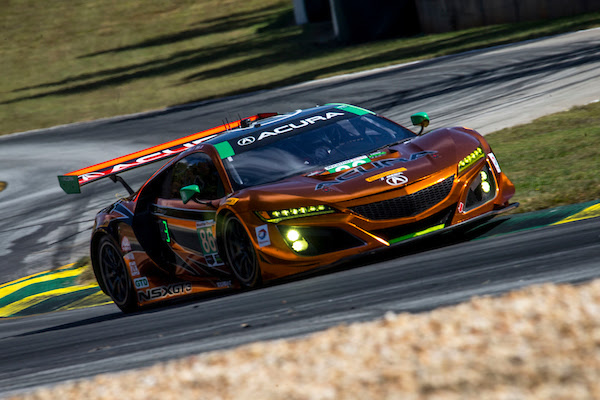 “I just want to say thank you to Acura, Honda, and HPD for all the work they’ve done this year with four podiums, two wins and a pole,” said team owner Mike Shank. “The 93 was a dominant car, we had led 145 laps – it’s tough. We had a plan and we were sticking to it. We won the first NAEC segment at the four hour mark. We had to square up on strategy on that last stop so that we were all back in sync with everybody and that’s why we lost some time because we had to take a little more fuel than the others. It’s a really tough deal. Unfortunately, we had a couple of issues with the No. 86 car today that set us back so I’m gutted for those guys because they had the pace to run with the front runners. But I want to say how proud I am of this Michael Shank Racing group, HPD, Honda, Acura, we showed again today that we were right there.”

DRIVER QUOTES:
Andy Lally, No. 93 Acura NSX GT3: “We dominated the first five and a half hours of the race. I’ve never dominated this race like that and I don’t think anyone ever had such a dominant performance that early into the Petit Le Mans. A big thank you to Acura and the Michael Shank Racing guys for giving us an awesome car. It is sad to end the year like this but in a way it was a good statement for Acura. I don’t know that there’s ever been a car in the 20 years of the Petit Le Mans to have a performance like that in quite a while. I’m glad Mark (Wilkins) is okay and obviously it’s a testament to the safety of the car. Mark was driving well, Kat (Legge) had an amazing stint and I was having fun out there as well. It’s not the way we wanted to close out the year but thank you to everyone at Michael Shank Racing, Acura, and HPD for a great year.”

Katherine Legge, No. 93 Acura NSX GT3: “It is disappointing, I’m gutted. We were having such a good race and it would have been nice to finish on a high note. We kind of did finish on a high note, because we were so competitive – you have to look at the positive. We had a successful year in the debut of the Acura NSX GT3 with a couple of wins and a pole, so this Michael Shank Racing team and everyone at HPD and Acura have a lot to be proud of.”

Mark Wilkins, No. 93 Acura NSX GT3: “I’m gutted. This NSX GT3 was the class of the field, we were leading a bunch of laps so I’m really disappointed for Katherine (Legge) and Andy (Lally). I was just trying to stay out of trouble and unfortunately some trouble found us. I had a few issues with that car and driver for a few of the previous laps and I was trying to play it conservatively. I’m just really bummed for the guys. They’ve worked so hard and have done such a great job all year long.”

Jeff Segal, No. 86 Acura NSX GT3: “It’s a really big disappointment not just for this race, but to end the season like this is not representative of how close we were and how many times we were right there this whole year. I’m gutted for the 93 team, they had a great race going. We had issues early on that were kind of out of our control and that put us back and then things kind of snowballed from there. I think we showed a lot of promise this year. We were always close, but never quite right there. I guess this year is the year of unfinished business.”

Ozz Negri, No. 86 Acura NSX GT3: “If we hadn’t have had our problem early on in the race, we would have been leading the race. It’s tough to take. We put so much into this – the MSR drivers, all of our team guys, HPD, Acura all year long. I’ve done it with a smile on my face. I have a great team behind me and we came a long way with this car and proved that this is the car to beat. This Michael Shank Racing team keeps mesmerizing me. They are my family, my home. I love them to death. I’m very proud of them.”

Tom Dyer, No. 86 Acura NSX GT3: “There was so much anticipation for my first time in the Petit Le Mans. There are so many fans and so much support. It’s been an amazing year for the team and for the Acura NSX GT3 in its first season in GTD. There was a lot of anticipation for me about rejoining the team and to try to give a proper send off in the final race. I guess it just wasn’t meant to be today and that sometimes happens in this sport. You take the good with the bad and know that you’ll just have to come back stronger. I loved driving the Acura NSX GT3 at Road Atlanta. It’s a great car to drive. All of the cars in this GTD category have their strengths and weaknesses and it’s amazing that the times are so close for how different they are to drive. The Acura NSX GT3 was right on par today. Our sister car led much of the race – we had good pace, we just had some misfortune and that was that.”