Sebring, Fla. (17 March 2018) – After a whirlwind weekend for the Michael Shank Racing squad it seemed as though there wouldn’t be light at the end of the tunnel, but the hard-working crew never gave up.

After a significant off-track excursion on Thursday nearly debilitated the No. 93 to the point of n 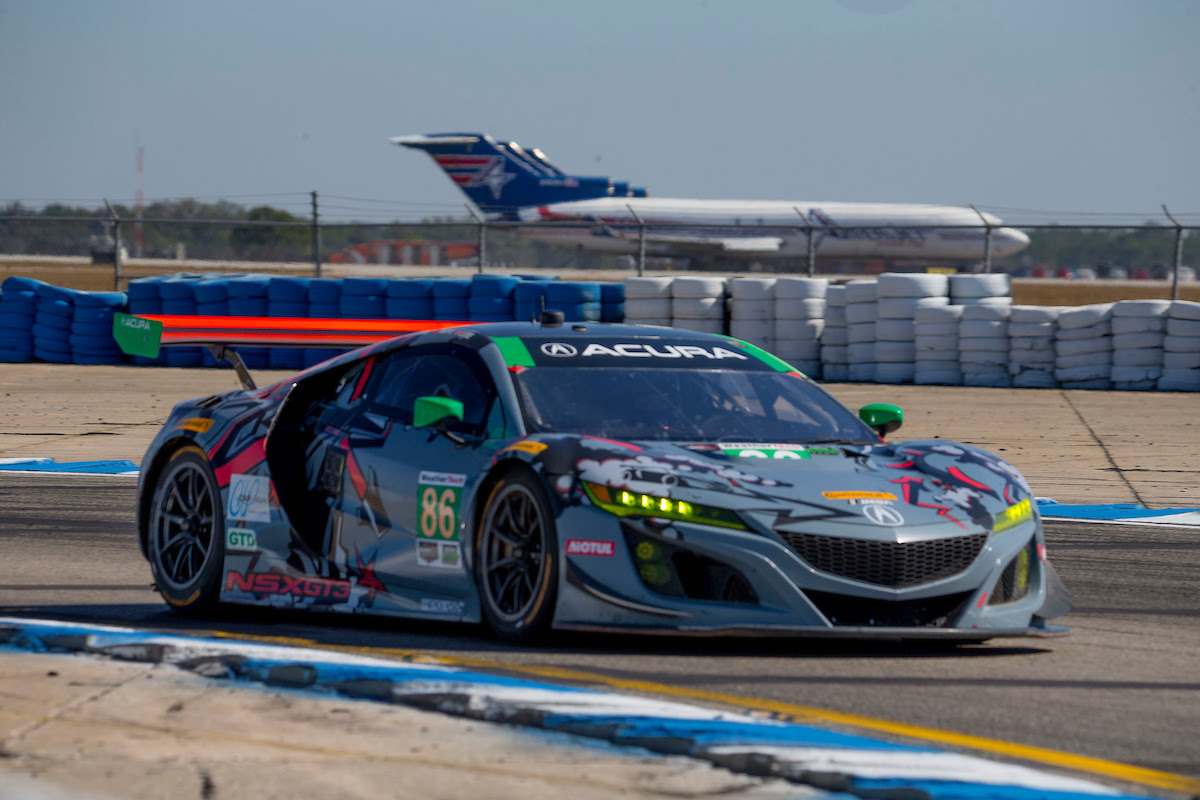 o return, the Michael Shank Racing squad’s heroic dedication brought the Acura NSX machine back to life in less than 36 hours. Not only did the No. 93 make a full recovery, Lawson Aschenbach posted the fastest time of the session in Saturday morning’s warm up.

Legge and Marks served as starting drivers and gave an excellent run in the early hours of the race, with Marks picking up 10 positions in the first hour and Legge leading the GTD field on Lap 14.

The pace was spot on for both Acura NSX GT3s with a combined 103 laps led and 212 combined laps spent in battling into the top three.

The team was well on its way to a podium finish until a series of incidents pushed both cars just outside of the top five. As Farnbacher and Parente brought home the No. 93 and No. 86 machines through the checkered, they had to settle with a seventh and eighth place result.

Despite a trying start to the weekend – rebuilding a car, starting last, and racing to a leading pace – the Michael Shank Racing crew showed the entire IMSA paddock that there is little limit to the amount of devotion and true passion the team has. 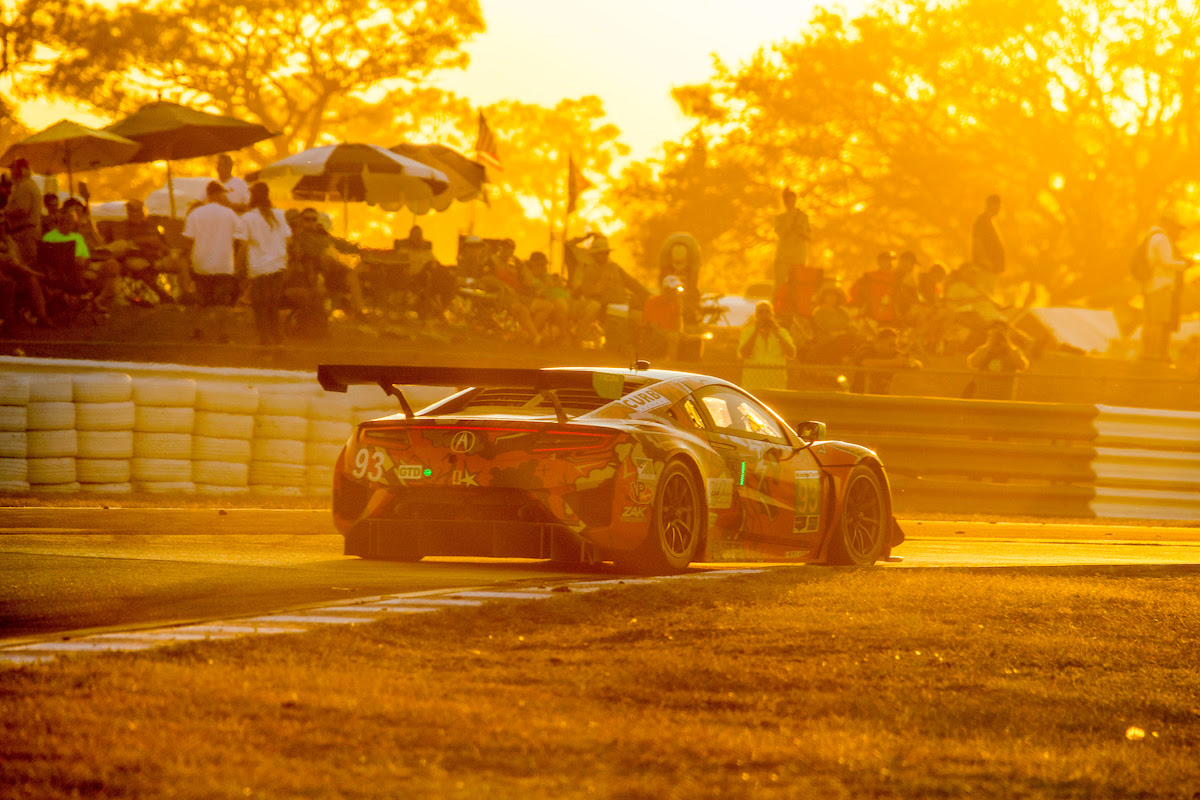 “The fight these guys put up today, I just couldn’t ask for more,” said Team Owner Mike Shank of his crew rebuilding the No. 93. “The result is a little disappointing because we ran so well but the cars were just beat to death at the end. All of the drivers did just wonderful, I couldn’t ask for any more from anybody. We will just take this result and roll on to Mid-Ohio.”

The third round of the IMSA WeatherTech SportsCar Championship will take Michael Shank Racing to home soil for the Mid-Ohio Sports Car Showdown, May 4th – 6th.

Driver Quotes:
Lawson Aschenbach, No. 93 Michael Shank Racing Acura NSX GT3: “I have to say hats off to everyone at Michael Shank Racing, Acura, Honda, HPD. To come back from that crash, make it to the race, have a flawless run with no issues, perform perfect pit stops, I am pleased with the result. Obviously, we are a little disappointed with the pace at the end and we have our work cut out for us. We will go back to the shop and think through this weekend because we have to work through the pace. All in all, I am really pleased with the weekend and where we came from and we will see what happens with the next race.”

Justin Marks, No. 93 Michael Shank Racing Acura NSX GT3: “Even though it’s not really the finish that we wanted today, the fact that we were even on the grid for this race is really a testament to how hard this team works. This car was completely destroyed on Thursday. They rebuilt it, and worked all night to get it on the grid. It had pretty good pace, I think there were some weaknesses to overcome in the long runs. Seventh place points isn’t terrible and we will regroup for the next one. We have some time to find more speed before we get to Mid-Ohio.”

Mario Farnbacher, No. 93 Michael Shank Racing Acura NSX GT3: “I’m not really sure what happened at the end there, but the car just fell off and I couldn’t really do much to save it. This car shouldn’t have even been on the grid, but the team worked so hard to get it here. We had good pace in the beginning of the race, I’m just disappointed that I couldn’t give the team a better result at the end.”

Katherine Legge, No. 86 Michael Shank Racing Acura NSX GT3: “We had a really great weekend and we had the pace to run up front. My first stint went really well and we were holding the car in the top three which was promising. Both Alvaro (Parente) and Trent (Hindman) did a great job and kept the car in podium contention, but unfortunately the car just got away from us at the end there. The next race for us will be Watkins Glen and hopefully we can continue to work on the car and get a good result next round.”

Alvaro Parente, No. 86 Michael Shank Racing Acura NSX GT3: “The end of the race really didn’t go as I had hoped. I wish I could have given it some more for the team because they worked so hard all weekend. We were running so great for the entire race, and to have it fall off at the end was disappointing. But the Michael Shank Racing guys gave us a great car and we had great pit stops so I have to thank them for their effort.”

Trent Hindman, No. 86 Michael Shank Racing Acura NSX GT3: “Some of these guys out here were setting some super quick laps, including my co-drivers and my teammates. The Michael Shank Racing crew gave us a great NSX GT3 all weekend long. It’s a shame with all of the yellows, I think that’s what really caught us out. Our car is phenomenal in clean air but as soon as we get in that dirty air we tend to struggle for bite. This was my first 12 Hours of Sebring and it was just an honor to be a part of it with such a great team and I certainly learned a lot and I hope I can come back in the future and have a shot at another one.”