Pataskala, Ohio (15 January 2019) –Ready to make his first full season campaign in the IMSA WeatherTech Sports Car Challenge Championship, Trent Hindman is absorbing as much knowledge as possible from his fast and experienced teammates ahead of the season opening Rolex 24 At Daytona.

With Meyer Shank Racing (MSR) veteran, AJ Allmendinger by his side in the No. 86 LaSalle Solutions / MSR Acura NSX GT3 Evo, Hindman has already taken in a wealth of knowledge from the 2012 Rolex 24 overall race winner.

Hindman will also be paired with 2009 Rolex 24 GT winner, Justin Marks as well as two time Sebring 12 Hour winner, Mario Farnbacher in the No. 86 Acura.

Hindman is no stranger to the Rolex 24, having competed in the 2017 and 2018 editions of the race which included a near GTD victory with MSR in 2018. Hindman is hoping that ‘third time’s a charm’ as he enters this year’s annual endurance classic. 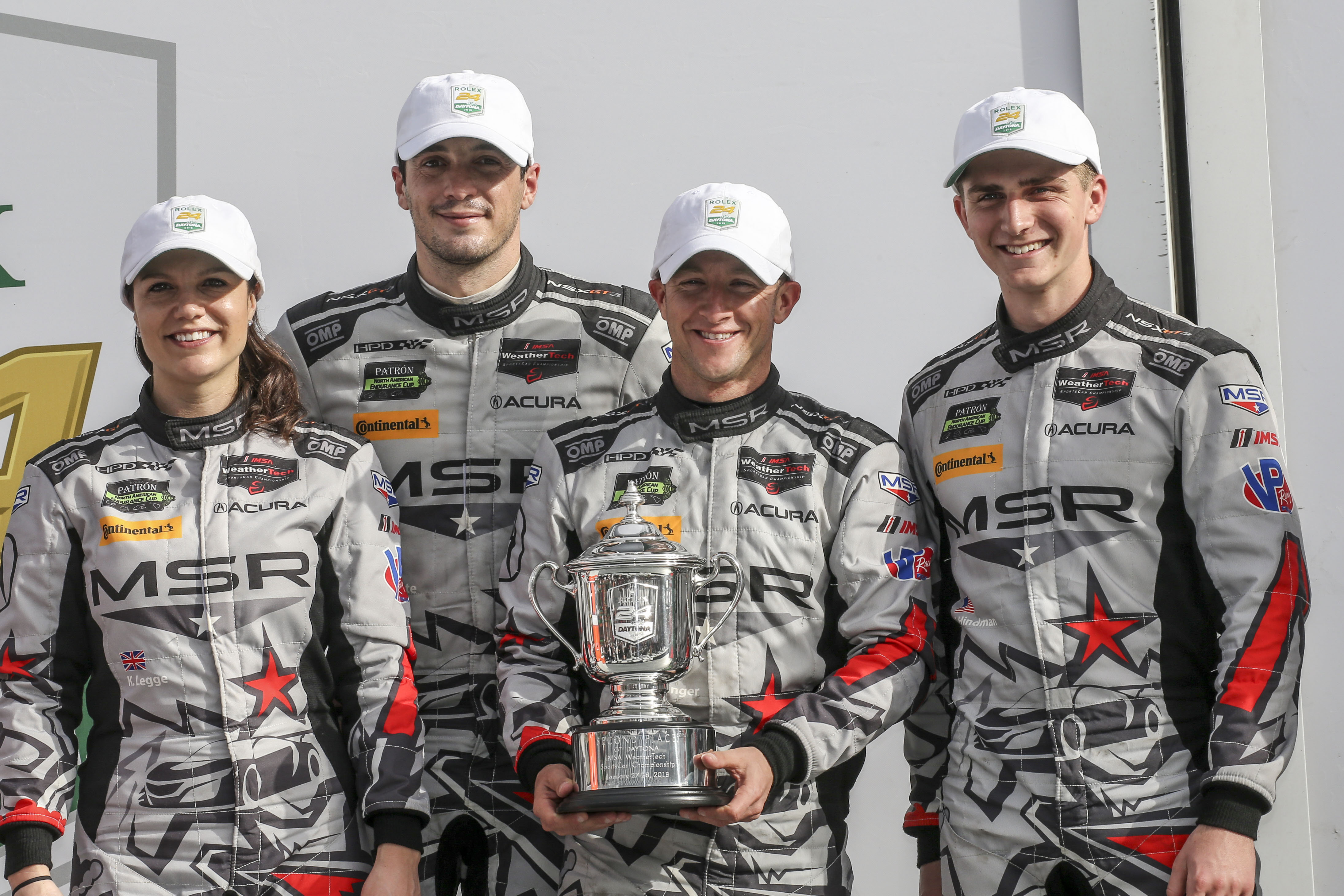 “This is the third time for me in the Rolex 24, and I find that I’m becoming more and more relaxed and routine each time,” explained Hindman. “I think for someone like me who still has so much to take in and learn about this event, the collective calm that my teammates show, along with the entire MSR crew, keeps the pressure from building up. Justin (Marks) and AJ (Allmendinger) are both past winners, Mario (Farnbacher) is a guy that’s won Sebring twice now, so there’s definitely no shortage of endurance racing knowledge for me to call upon when I need it.”

Allmendinger, who has driven for MSR alongside greats including Ozz Negri, Paul Tracy, John Pew, Michael Valiente, Mark Patterson, and the late Justin Wilson, finds that there is a special talent within Hindman and his motivation to learn as much as possible.

“Having driven with Trent last year at the Rolex, he seemed to make big gains in speed throughout 2018,” said Allmendinger. “Just from the Roar test a few weeks ago I can tell he has developed all around with his abilities. He is really fast and will only get faster and I am excited to see him succeed this season.”

The 23-year-old New Jersey native not only admires the experience that Allmendinger has with 12 Rolex entries but Hindman has looked up to him as an idol since the start of his career.

“Thirteenth Rolex 24?” laughed Hindman. “I grew up watching AJ on TV and he killed it at the Rolex 24, in Champ Car and NASCAR, so the fact that now, in 2019, I’m getting to share a car with this guy? It’s mind-blowing. I do have to remind myself though that we’re both here for the same reason and that’s to win. He’s done it before, I have not, so the biggest thing I’m learning from him and all my teammates is the attention to detail needed in order to get yourself that iconic watch.”

Reviewing data is one of the most important aspects about learning the technicalities of the 3.56-mile Daytona International Speedway and Hindman has taken full advantage of watching onboard footage of Allmendinger to learn from. 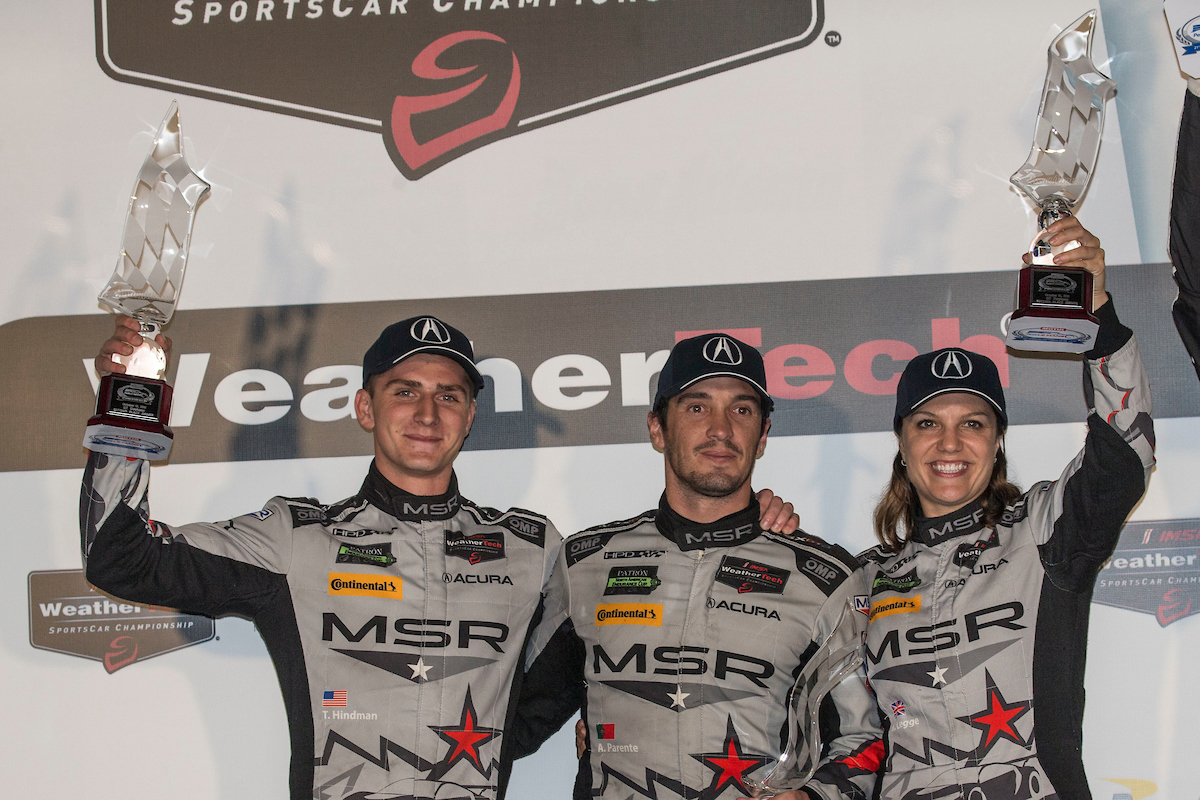 “Now having been home for a few days since the Roar, having the opportunity to look back through all the data and onboard from last weekend and compare it to the onboard footage of AJ back in his single seater days, I find it pretty wild how much his driving style hasn’t really changed over time, especially when you consider the years of driving a NASCAR cup car. It’s ultra-aggressive, it’s finesse, there’s certainly a lot for me to learn from it but most importantly, it’s FAST, and that’s all we care about.”

After his third-place preliminary qualifying run for garage and pit assignments at the Roar, Hindman is already off to a fast start as he hopes to nab his first Rolex 24 win and continue on to a successful full season run with Meyer Shank Racing.

The green flag will wave for the 57th running of the Rolex 24 At Daytona on Saturday January 26th at 2:00PM ET on NBCSN.