The annual IMSA WeatherTech SportsCar Championship kick-off saw the team show strength through the variable weather, after leading 92 laps. The race featured periods of powerful rain which made for a chaotic finish to the 57th running of the endurance event as the team pursued another victory in the fabled race.

With a combined total of 29 Rolex 24s under their belts ahead of the race weekend, Trent Hindman, Mario Farnbacher, Justin Marks and AJ Allmendinger paired in an attempt to snatch the highly sought-after Rolex Daytona Chronograph watch that goes to the winners.

Getting a strong start to the race, the No. 86 LaSalle Solutions Acura led 92 laps within the first 20 hours of the race with Hindman, Marks and Allmendinger all leading at various points. Allmendinger’s takeover of the lead on lap 521 officially continued the MSR veteran’s streak of leading every Rolex 24 (13) that he competed in with MSR.

As the race approached the 15 hour mark, the dark skies opened up as forecasted and the rain poured all the way through to the conclusion of the race. Marks was the first driver to put the new Michelin rain tires to the test after taking over from Farnbacher on lap 321, entering the fray 11th upon returning to the track. Marks made an incredible drive in treacherous wet conditions that saw him move up the order to claim second by lap 349.

The final nine hours of the race generated just 38-minutes of green flag racing with extended yellow flag running as well as two separate red flag periods – the first time in race history. Despite the short period of green flag activity, the conditions demanded full focus from closing driver, Hindman who relied on team spotter Mike Sweeney to maneuver through the on-track melee.

Also on hand, Ben Waddell served as a second set of eyes in the spotter box during the dramatic run to the finish as cars skated off track in nearly every corner. 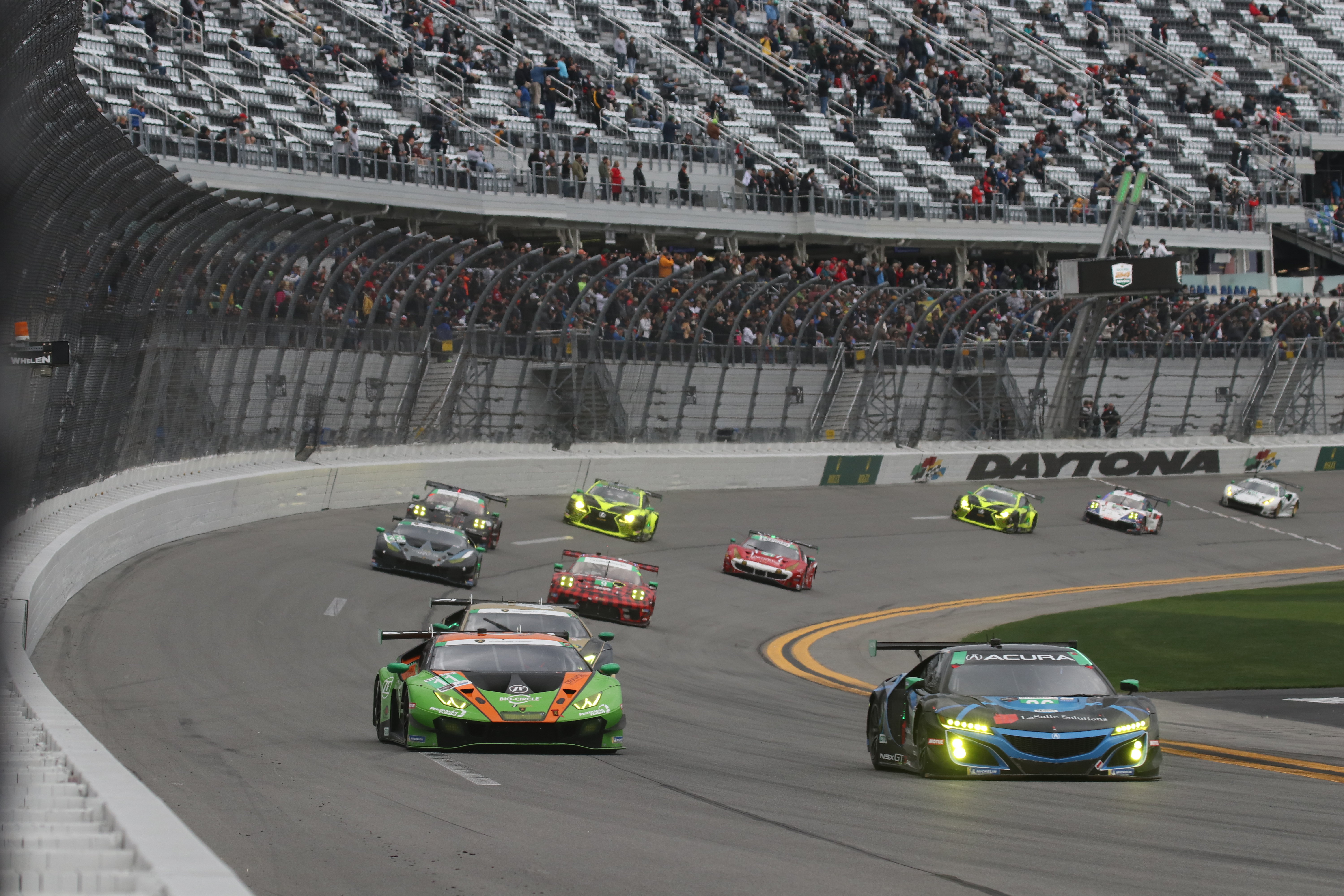 Unfortunately, at the 23 hour and 50-minute mark, the 57th running of the Rolex 24 Hours At Daytona was called off due to increasing bad weather conditions. The No. 86 LaSalle Solutions / MSR Acura NSX GT3 Evo finished with a fifth place result.

Meyer Shank Racing will look ahead to the next IMSA WeatherTech SportsCar Championship race at Sebring International for the 12 Hour Endurance classic on March 16th but will first kick off the 2019 NTT IndyCar Series at the Streets of St. Petersburg on March 10th.

Mike Shank:
“This was a really tough one for us. I don’t think I have experienced a race like I did in the last 24 hours. Trent, Mario, Justin and AJ all impressed me. The four of those guys are able to get in the car and drive the wheels off of it. Trent has continued to impress me with his abilities and paired with Mario, Justin and AJ they were a great team. We were in contention for the win, but with the weather our cards didn’t fall right. A top five is still good points to start off the season.”

Trent Hindman, No. 86 LaSalle Solutions Acura NSX GT3 Evo:
“The most important thought I had out there was to just keep the car on the track. I had no idea where we were on speed or track position – completely blind. I wanted to keep the car in one piece, on track, and pointed straight. In order to move up more positions, it would have required a lot more risk in a situation that wasn’t great to begin with considering the weather. A big thanks to Meyer Shank Racing, LaSalle Solutions, and all my teammates for all the work they have put in. We did the best we could with the car that we had and the rain did not help our strategy any. Mike Sweeney, our spotter, was completely on point and amazing during the craziness of this race so a big shout out to him. Now to get back out there and shoot for a better result at Sebring.”

Mario Farnbacher, No. 86 LaSalle Solutions Acura NSX GT3 Evo:
“We had a good start into the race. Trent (Hindman) had a great double stint in the beginning which put the car in a good position for me to take over. Unfortunately, we ran low on fuel going into a caution causing us to have to pit to take emergency fuel. After that, I had to work to put the car back in a good position while maintaining the lead lap. My second stint, late in the night, was also very good. The total chaos started with the rain. It’s unfortunate that we were not able to finish the race after running for so long. Trent and AJ did a great job at the end and this LaSalle Solutions Acura was set up great for us. We will take the top five and aim for a better result at Sebring.”

Justin Marks, No. 86 LaSalle Solutions Acura NSX GT3 Evo:
“This has been an incredibly difficult race due to the environmental elements. I wasn’t entirely happy with my pace in the dry, but when it rains – I have a lot of confidence. The car was performing well in the rain which helped me get it up to second place. These were tough conditions and we have been trying to make the most of it. Additionally, getting caught out of pit sequence compared to everyone else has made it important for us to get back to the front on track. The team has done a fantastic job. The effort put in this weekend, at the Roar, and all winter to get these cars ready is amazing. I am proud to be with this team.”

AJ Allmendinger, No. 86 LaSalle Solutions Acura NSX GT3 Evo:
“It was nasty out there, on the border of ridiculous, but I get it – it’s the Rolex 24, not the Rolex 19. Conditions are nasty, probably the worst conditions I’ve driven in. I got in a good rhythm, though it wasn’t easy. But I need to say a lot of thanks to Honda/HPD – their tuning on the motor makes it a lot easier to drive. You kind of place the car and hold onto it but what they do with the motor makes life a lot easier in these conditions. We were here to win a watch and I’m bummed that we weren’t able to do that for the team. I am so proud of these guys, they are my family. They worked hard all race long, great pit stops, great work on the car and I am so lucky to get to race for Mike (Shank) once again. Even though it wasn’t a win, we kept it clean and finished in the top five which will be good points for Mario and Trent heading into the rest of the season.”